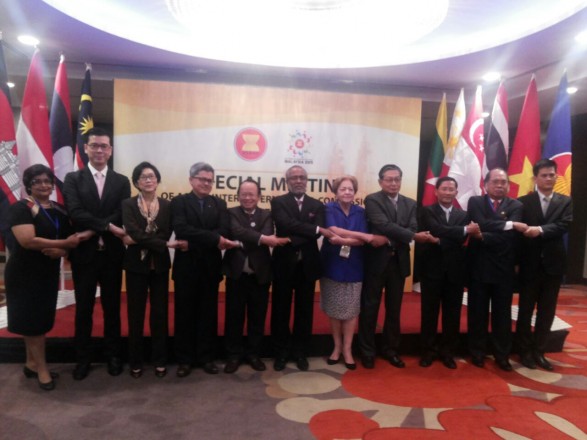 The ASEAN Intergovernmental Commission on Human Rights (AICHR) convened its Special Meeting, in Kuala Lumpur, Malaysia, from 2 to 5 August 2015. The Meeting was chaired by H.E. Tan Sri Dr. Muhammad Shafee Abdullah, the Chair of the AICHR and the Representative of Malaysia to the AICHR.

The ASEAN Intergovernmental Commission on Human Rights (AICHR) convened its Special Meeting, in Kuala Lumpur, Malaysia, from 2 to 5 August 2015. The Meeting was chaired by H.E. Tan Sri Dr. Muhammad Shafee Abdullah, the Chair of the AICHR and the Representative of Malaysia to the AICHR.

Over the course of four days, the Meeting discussed various programmes and activities which will be organized by the AICHR, including among others, the ASEAN Youth Debate on Human Rights, and the Regional Workshop on the Role of Youth in Promoting Human Rights: Making Rights a Reality, also the AICHR First Symposium on Judiciary: The Judiciary, Human Rights and Rule of Law.

The AICHR has embarked on a Regional Study on the Economic Participation of Women in ASEAN, the Meeting discussed on the possibility to issue a statement on the subject by the end of this year, in time with the inauguration of the ASEAN Community.

The Meeting exchanged views on effective means for conducting thematic studies, including the selection of National Focal Points with regards to preparation of national reports.

On 3 August 2015 the AICHR met the ASEAN Foreign Ministers to submit its Annual Report 2015, Five-Year Work Plan 2016-2020 and Priority Programmes 2016. At this interface between the AICHR and the AMM, the Chair of AICHR reiterated the AICHR’s commitment to enhance interaction with relevant ASEAN bodies and organs in order to mainstream human rights across the three pillars of ASEAN. The interface also took note of the AICHR assessment and recommendation on the review the TOR of AICHR.

On the last day, the AICHR met with Working Group for an ASEAN Human Rights Mechanism and exchanged views on their respective priorities and possible cooperation on human rights.

The Meeting thanked the Representative of Malaysia to the AICHR and the government of Malaysia for the hospitality and excellent arrangements of the Meeting. The AICHR will hold their next meeting in Manila, Philippines, on 16 to 17 September 2015.