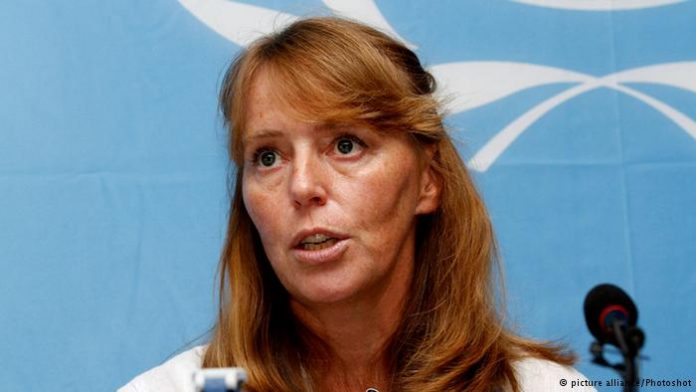 The United Nations Special Rapporteur on the situation of human rights in Cambodia, Rhona Smith,today expressed her deep concern about the breakdown in the political dialogue between Cambodia’s main political parties given its implications for human rights of the Cambodian people.

GENEVA (23 November 2015) –The United Nations Special Rapporteur on the situation of human rights in Cambodia, Rhona Smith, today expressed her deep concern about the breakdown in the political dialogue between Cambodia’s main political parties given its implications for human rights of the Cambodian people.

“The past weeks have been marked by a number of worrying developments: increasing tensions between the two principal political parties; incidences of violence; intimidation of individuals; and resort to offensive language in the political discourse,” the expert said.

Her statement comes in the wake of the latest report that Mr. Sam Rainsy, leader of the Cambodia National Rescue Party (CNRP, the minority party in Parliament), has been summoned to appear in court on 4 December 2015. The summons relates to the allegation that he was complicit in the falsification of public documents, the use of false public documents and incitement to cause serious chaos to security and social order in the capital, Phnom Penh.

This follows the court decision of 13 November leading to the issue of an arrest warrant on the basis of Mr Rainsy’s 2011 conviction for ‘public defamation and instigation of discrimination’ (related to an incident in 2008), and the removal of his parliamentary immunity by the National Assembly on 16 November 2015.

“Any intensification of current events could bring Cambodia to a dangerous tipping point,” Ms. Smith said, warning about the potential for further political instability and violence.

“My interest is not in, and my role is not to interfere with, national politics,” said the Special Rapporteur, who has been monitoring closely the situation of human rights in Cambodia since her appointment in March 2015 by the UN Human Rights Council, including a string of cases against members of the CNRP.

“Neither do I wish to comment on the merits of the judicial actions against anyone, including Mr. Sam Rainsy, unless such acts infringe on the rights of the accused, including the rights to due process of law, including a fair trial and the rights of all accused persons,” she noted.

The Special Rapporteur added: “It is of great concern to me that there are multiple alleged violations of peaceful exercise of freedoms of opinion and expression, as well as the right to participate in political life, all of which are guaranteed by the International Covenant on Civil and Political Rights to which Cambodia is a party.”

The independent expert also noted with alarm the violent assault against two CNRP Parliamentarians on 26 October following a large-scale pro-Government protest outside Cambodia’s National Assembly building in Phnom Penh allegedly amidst the presence of law enforcement officers, who apparently did not intervene to stop the assaults. She recalled that the Government of Cambodia is under international human rights obligations to guarantee the physical security of all persons under its jurisdiction, including parliamentarians.

“I have appealed in private to the leaders of both parties to abide by their May agreement, demonstrating mutual respect by returning to the ‘culture of dialogue’, so that the people of Cambodia may continue to enjoy their human rights in an environment of political stability and peace,” the Special Rapporteur said.

Ms. Rhona Smith (UK) was appointed by the United Nations Human Rights Council in March 2015, succeeding Mr Surya P. Subedi, who completed his six-year term on the mandate in March 2015. As Special Rapporteur, Ms Smith is independent from any government or organization and serves in her individual capacity. Ms Smith holds Professor of International Human Rights in the United Kingdom. Learn more, log on to: http://www.ohchr.org/EN/HRBodies/SP/CountriesMandates/KH/Pages/SRCambodia.aspx