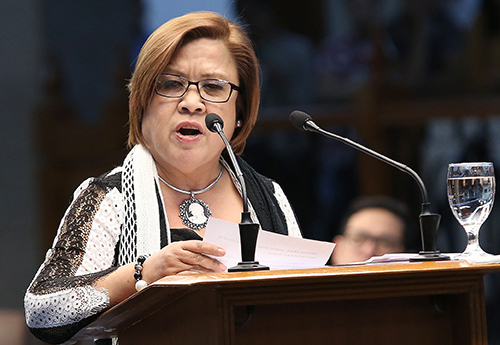 De Lima, who has been detained at the headquarters of the Philippine National Police since her arrest on February 24, 2017, has been one of the staunchest critics of the government’s abusive “war on drugs.” The authorities arrested her after she sought to investigate extrajudicial executions committed in the context of the anti-drug campaign.

“Every day that Senator de Lima remains detained is another day of injustice, not only against her but against all Filipinos whose rights – to life, liberty, health, and due process – have been trampled on by a violent and repressive government,” said Nicholas Bequelin, regional director for East and Southeast Asia and the Pacific at Amnesty International.

Since her detention, the authorities have made no substantial progress in court proceedings for the three drug-related cases eventually brought against her. These cases have been marked by undue delays after at least six judges decided to recuse themselves from hearing the cases or opted for early retirement.

Currently, the prosecution is presenting witnesses, most of whom have been convicted of drug-related charges. De Lima has been prevented from participating in hearings and proceedings at the Philippine Senate and faces restrictions on communications with outsiders.

“Under the Duterte administration, women human rights defenders have repeatedly faced state-sanctioned intimidation and reprisals,” said Mukunda Kattel, executive director of FORUM-ASIA. “We have also observed the intensification of gender-based attacks, such as sexual harassment and the use of dehumanizing and misogynist language to silence women human rights defenders who continue to push for greater accountability.”

A case in point is the prominent journalist Maria Ressa, editor and CEO of the news website Rappler, which has been publishing investigative reports about the “war on drugs.” She is facing numerous lawsuits. They include attempts to shut the website down for alleged tax evasion and violation of the country’s restrictions on foreign ownership. Each of the charges carries heavy fines and sentences of up to 10 years in prison, which could lead to her imprisonment for decades.

Vice President Leni Robredo, another critic of the government, was subjected to a smear campaign by President Duterte and other high-level government officials. She had called on the government, while briefly co-chair of the Inter-Agency Committee on Anti-Illegal Drugs (ICAD), to address the flaws of the anti-drug campaign, and recommended the adoption of a health-based approach.

Among the many other human rights defenders threatened and harassed for their human rights work have been Cristina Palabay, the secretary general of the human rights group Karapatan, and nuns of the Rural Missionaries of the Philippines.

Human rights violations in the Philippines have come under increasing international scrutiny. At the United Nations Human Rights Council session in June 2020, the high commissioner for human rights is expected to present her report on the country’s human rights situation. The International Criminal Court confirmed in December 2019 that it would soon decide whether to open an investigation into crimes under international law committed in the context of the “war on drugs.”

In January, the United States Senate approved Senate Resolution 142, which calls for sanctions such as asset freezes and travel bans against government officials responsible for de Lima’s arrest and prolonged detention, as well as for the extrajudicial executions of alleged drug offenders. Shortly afterward, the US government imposed visa restrictions on Duterte administration figures who have been implicated in serious rights violations.

“The Philippines government has grossly mistreated Senator de Lima so that other whistleblowers and rights monitors will not dare expose the abuses and injustices of Duterte’s ‘drug war,’” said Phil Robertson, deputy Asia director at Human Rights Watch. “The UN Human Rights Council at its June session should hold the Philippines government accountable for its abuses against the senator and other human rights defenders in the country.”

For a PDF version of this press release, click here