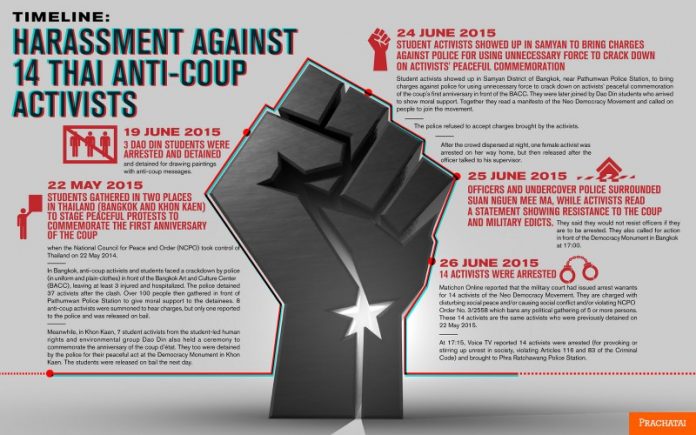 We, the undersigned human rights organisations, write to you regarding the charges against and arrest of 16 student activists; 7 from the Dao Din student group based in Khon Kaen, and 9 from Bangkok. These students have been charged for their role in peaceful public assemblies on 22nd May 2015 commemorating the first-year anniversary of the May 2014 military coup.

We, the undersigned human rights organisations, write to you regarding the charges against and arrest of 16 student activists; 7 from the Dao Din student group based in Khon Kaen, and 9 from Bangkok. These students have been charged for their role in peaceful public assemblies on 22nd May 2015 commemorating the first-year anniversary of the May 2014 military coup. 14 of these students are now facing additional sedition charges which were used on 26th June 2015 to arrest these 14 students. These 14 students from the Neo-Democracy Movement were taken to Bangkok Military Court around midnight on 26th June 2015 and have been put behind bars for 12 days awaiting trial in military court. The 14 students are being held in the Bangkok Remand Prison and the Central Women Correctional Institution.

The 14 students include 7 members of the Khon Kaen-based student group: Chatupat Boonyapatraksa, Apiwat Suntararak, Payu Boonsopon, Panupong Srithananuwat, Suvicha Tipangkorn, Supachai Pukrongploy and Wasant Satesit. All were arrested on 22nd May 2015 when they staged a peaceful protest in Khon Kaen against the effects of military rule on community rights, human rights and the poor in northeast Thailand. They were released on bail after having been charged by Khon Kaen Military Court for violating Order No. 3/2558 (3/2015) issued by the ruling National Council for Peace and Order (NCPO). Similarly, the 7 Bangkok-based university students – Rattapol Supasupon, Rangsiman Rome, Songtham Kaewpanpruk, Chonthicha Jaengraew, Rattapol Supasophon, Apisit Sapnapapha, Pakorn Areekul, and Pornchai Yuanyee – staged a peaceful protest in central Bangkok on 22nd May 2014, have been charged with violating NCPO Order 3/2558. The sedition charges, under Section 116 of the Thai Penal Code, follow the students’ peaceful demonstrations against your military dictatorship in Bangkok on 24th June and 25th June 2015.

We condemn the use and existence of Order 3/2558, because this order invokes all NCPO Orders issued between 22nd May 2014 and 1st April 2015, which have effectively suspended all civil and political rights and fundamental freedoms on unjustifiable grounds of national security. Article 116 of the Thai Penal Code is a severe restriction on freedom of speech which is used to criminalise political activists.

Order No. 3/2558 by virtue of Article 44 of the Interim Constitution 2557 B.E. gives sweeping powers to and provide blanket immunity for the military junta. It allows the militarization of all law-enforcement and state operations. For example, this Order enables the continued use of military courts and military personnel to carry out Criminal Code procedures. Furthermore, the authorities exercising duties under this Order enjoy full immunity from administrative law and judicial review.

The use of military courts to try civilians is a blatant violation of international fair trial rights, as guaranteed by Article 14 of the International Covenant on Civil and Political Rights (ICCPR), which Thailand ratified in 1996. Article 14, Paragraph 1, enshrines the principle of trial being conducted by a “competent, independent and impartial tribunal.” This principle is violated by the very use of military courts to try civilians; especially when the military controls all branches of state power, including the executive, legislative, and now, judicial branches of state power. Article 14, Paragraph 5 explicitly guarantees the right to judicial review of any conviction and sentence by a higher court, which is a right denied to anyone tried in a military court in Thailand.

Furthermore, we decry the harassment and intimidation of the student groups. The ICCPR imposes legally-binding obligations on State Parties to respect a number of human rights and fundamental freedoms, including the freedom of expression (Article 19) and right to peaceful assembly (Article 21).

We also turn your attention to Article 17 of the ICCPR which guarantees the right to protection from “arbitrary or unlawful interference with his privacy, family, home or correspondence, [and] to unlawful attacks on his honour and reputation.” State authorities stand in direct violation of this right as they have carried out a constant campaign of intimidation and harassment of the student groups. Uniformed officials (both police and military) have been photographing the students’ parents houses; authorities have been questioning parents on the up-bringing of their children; Khon Kaen University have been pressured to call all the students’ parents in for a meeting where authorities lectured the parents on 11th June 2015; and soldiers, police and other authorities have been threatening repercussions if community-based Human Rights Defenders associate with the Dao Din student group again.

Finally, your Orders as head of the NCPO violate the rights and freedoms guaranteed by international human rights law, which continues to apply to Thailand under the Interim Constitution. Most directly, Article 25 of the ICCPR enshrines the right to participate in public affairs for people. The suspension of elections, community rights, community participation in environmental and natural resource management policy is all violations of Article 25. The absolute power you hold, as per Article 44 of the Interim Constitution, effectively guts this right.

The students’ commemorative activities on the 22nd May 2015 and their pro-democracy demonstrations on 24th and 25th June 2015, expressed their opposition to these systematic and institutional violations of basic human rights and fundamental freedoms. It must be underlined that Article 19 of the ICCPR also guarantees the right to hold any opinion and express it by any media. Thus, students have throughout all their activities been exercising their own human rights and fundamental freedoms to decry your violations of people’s human rights. The legal persecution of these students and the authorities’ harassment of the students’ affinity groups are direct breaches of international human rights law. These students are political prisoners of your repressive regime.

These civic-minded students, and all community-based Human Rights Defenders they work with, deserve recognition, not criminalisation. Socially-conscious individuals, especially youth, who engage in peaceful actions to promote human rights are essential members of a democratic society and contribute to social justice.

Therefore, we urge you to:

Send your solidarity at freethaipoliticalprisoners@gmail.com