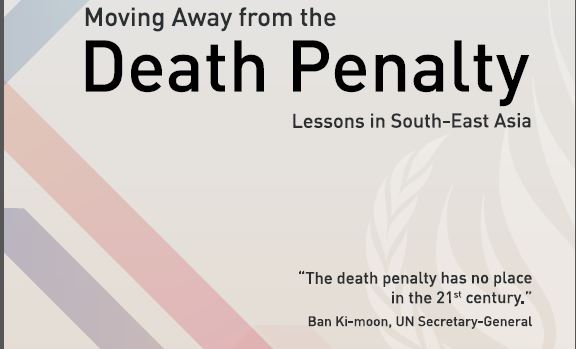 This publication comes at an important juncture where the region appears to follow global trends in ‘moving away’ from capital punishment while facing complex challenges, such as the application of death penalty for drug-related crimes and pressures to return to executions after periods of moratorium. Some States are fully abolitionist (Cambodia, Timor-Leste, and the Philippines), others are abolitionist in practice (Brunei Darussalam, Lao PDR, Myanmar), while others have an unofficial moratorium in place (Thailand). Some are undertaking efforts to reduce the numbers of executions and other reforms (Singapore, Malaysia), while in others, the direction seems more uncertain (Indonesia, Vietnam). As stated by Professor William Schabas: “Fundamentally, it is a positive picture of progress and one consistent with the worldwide trend. The continuation of this trajectory should be encouraged so this region may eventually be free of capital punishment.”

The publication is based on a number of years of work of the OHCHR Regional Office for South-East Asia. The Office collaborated with the Ministry of Justice in Thailand to organize an Expert Seminar on “Moving Away from the Death Penalty in South-East Asia” in Bangkok on 22 – 23 October 2013. Participants laid the ground for establishing a forum for intra-regional exchange between key stakeholders on international and regional law and practice regarding the death penalty. As a follow-up to that meeting, the Indonesian Representative to the ASEAN Intergovernmental Commission on Human Rights (AICHR) organized with OHCHR its Third Jakarta Human Rights Dialogue on “The Right to Life and Moratorium on the Use of the Death Penalty” in Jakarta on 10 – 11 November 2014.

Both events had participants from Governments, AICHR, national human rights institutions, non-governmental organizations, as well as international experts, lawyers, and academia from the region. “We hope this publication can be a resource for further discussions in the region and help to establish moratoria on the use of death penalty and ultimately its abolition,.” noted Matilda Bogner, the Regional Representative of the OHCHR Regional Office for South- East Asia.

The English version is accessible on OHCHR Bangkok website at http://bangkok.ohchr.org/. The publication will be soon available in Thai, Bahasa and Vietnamese. In the coming months, the Regional Office will also launch the publication at events organized with partners in the region.