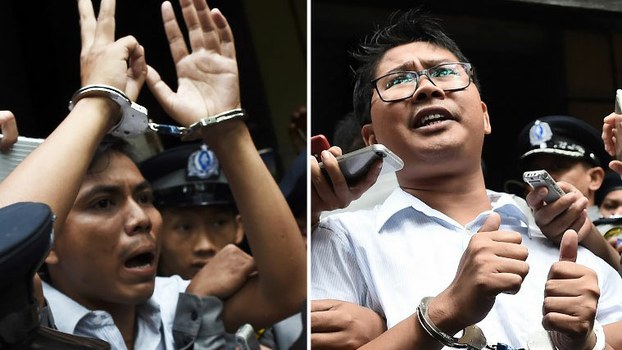 The pair were arrested on 12 December 2017 and charged under the Official Secrets Act for ‘illegally acquiring the information with the intention to share it with foreign media.’[1] They were working on an investigative piece on violence against the Rohingya minority. Both Wa Lone and Kyaw Soe Oo have denied the allegation and said they were trapped by the police officers on the date of the arrest.

The verdict today is a serious setback for press freedom in Myanmar, and is part of a larger trend of increasing threats against journalists in the country.[2]  Such threats and violence have consequently diminished the room for covering critical issues like militancy and human rights abuses, particularly in the conflict areas. In Myanmar, the situation of press freedom has worsened due to draconian laws such as the Section 66(d) of the 2013 Telecommunications Law that has been aggressively used to curb critical voices and legitimise discrimination and violence against journalists.

Under this oppressed situation, it is hard to safeguard the diversity, pluralism, and impartiality of media. The Government of Myanmar has failed to see the important role of journalism as a partner for safeguarding democracy and protecting human rights in the country. The verdict against the Reuters journalists can be seen as an attempt to create an environment of fear and suppress freedom of expression and press freedom in the country.

FORUM-ASIA strongly urges the Court to overturn the conviction on appeal and release Wa Lone and Kyaw Soe Oo unconditionally and immediately. FORUM-ASIA calls on the Government of Myanmar to translate its commitment to democracy and human rights into actions by creating a safe and enabling environment for journalists to work freely and exercise their rights. This includes repealing all oppressive laws against freedom of expression and press freedom, particularly the Official Secrets Act and Section 66(d) of the 2013 Telecommunications Law. FORUM-ASIA further urges the Government of Myanmar to accede to the International Covenant on Civil and Political Rights (ICCPR) and other international human rights treaties in order to demonstrate its commitment to democratic reform and respect of human rights.