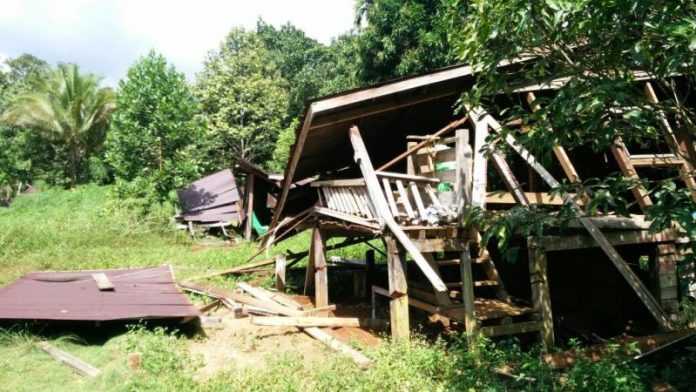 Asia Indigenous Peoples Pact (AIPP) stands in solidarity with more than 200 indigenous Dusun Kiuli villagers in Kampung Bobotong, Tongod in Sabah, Malaysia, who were left homeless after the Sabah Forestry Department (SFD) destroyed their houses on 16 March 2017. Around 140 SFD personnel and police officers demolished their huts and houses with chainsaws for allegations of illegal encroachment into the Sungai Pinangah Forest Reserve.

AIPP, a regional organisation of 48 indigenous organisations and movements from 14 countries in Asia, joins its member organization, Jaringan Orang Asal SeMalaysia (JOAS), in condemning the demolition and calls on the Sabah Forestry Department and concerned government authorities to respect the rights of the indigenous Dusun Kiuli over their forest resources in line with international human rights obligations of Malaysia.

The Dusun Kiulu has been occupying the forest area since 1979, which was five years before it was officially announced to be a forest reserve although the SFD contends it was gazetted in 1965. A preliminary report by the Human Rights Commission of Malaysia (SUHAKAM) on the matter has found the villagers had filed land applications, though not recognized by the SFD, dating back to 1984, which proved their decades-long occupancy of Tongod. This is contrary to a recent assertion of the SFD that non-natives had encroached upon the land in the 1990s for personal gain. Further, the report claimed of heavy-handedness and use of excessive force in the demolitions with deployment of police equipped with firearms and a dog-tracker.

Regardless of the occupancy dispute, forcibly demolishing houses and rendering people homeless is never justifiable or should ever be considered a course of action that one would resort to. Such manner of law enforcement is “brutal and inhumane,” as JOAS has openly pronounced.

Further, the occupation permit, which the SFD had advised the Dusun Kiulu villagers to apply for and is meant to regularize ‘illegal’ usage of forest reserve land and ensure no further expansion at the cost of RM250 per hectare per year to the villagers, disregards the indigenous community’s adat or customary rights. The occupation permit is another manifestation of the SFD to its lack of respect to the Orang Asli’s rights over their lands and territories and to self-determination.

AIPP stands with JOAS its in calling the SFD and the Government of Malaysia to consult and cooperate in good faith with the indigenous Dusun Kiuli in obtaining their free, prior and informed consent before deciding on the Forest Reserve. Correspondingly, AIPP urges the Malaysian authorities to hold the SDF accountable to their unjustifiable recourse and ensure the safety of the villagers as SUHAKAM investigation is completed. Further, AIPP requests the SUHAKAM to publish its final report on the case with strong recommendations to guarantee the rights of the Dusun Kiulu.