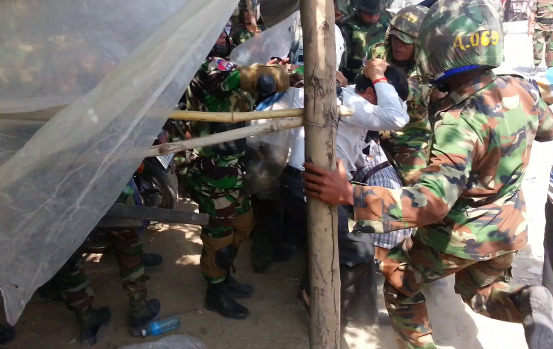 We, the Cambodian and International Civil Society Organizations represented in this statement, condemn the use of armed force and escalating violence against the Cambodian people.

At the start of 2014, following three weeks of peaceful demonstrations in Phnom Penh, tensions increased dramatically as authorities brutally cracked down on garment factory workers, who were demonstrating for a minimum wage of USD 160 per month. The garment industry, which represents 80 % of Cambodia’s export earnings is well established and internationally significant, producing clothes for many well-known global brands, such as Levis®, H&M, Gap, Puma and others.

On the 3rd January 2014, four civilians were shot dead by military forces, at least 39 people were injured, including a 17 year old boy and a pregnant woman, and thirteen more men were arrested near Canadia Industrial Park on Veng Sreng road, Phnom Penh. The previous day, during clashes between security forces and striking workers in front of Yak Jin factory on National Road 4, ten men were arrested by the Military Special Command Unit 911. Those arrested included the human rights defender and President of the Independent and Democracy of Informal Economic Association (IDEA) Vorn Pao, Theng Savoeun from the Coalition of Cambodian Farmer Community (CCFC), Chan Puthisak from the Boeung Kak Community. In total, 23 people were arrested by armed forces. Some of the detainees were badly beaten and left without access to needed medical treatment for several days.

All arrested appeared before Phnom Penh Municipal Court on 3rd and 4th January and were charged under Articles 218 and 414 of the Penal Code (intentional violence with aggravating circumstances and intentional damage with aggravating circumstances). The Royal Government of Cambodia then de facto suspended the Cambodian Constitutional Rights of Freedom of Assembly, Association and Peaceful Demonstration as guaranteed in Articles 37 and 41.

We insist that the Royal Government of Cambodia:

According to monitors, the clash started when the authorities used electric batons toward the protestors, who then replied by throwing stones. In response, the military used disproportionate force by firing live ammunitions in the crowd.

The use of military soldiers to defend private businesses and crackdown on civilian protests is excessive, and the use of security guards and plain-clothes forces to arrest and detain civilians is illegal.  Live ammunitions, sling shots, tear gas, electric batons, metal sticks and the display of excessive force must never be used against civilians who, by law, are entitled to exercise their fundamental rights.

The use of any state force must strictly follow the principles of legality, necessity and proportionality, and the demonstrations must comply at all time with international standards in maintaining public order.

We strongly condemn the use of brutally excessive force, arbitrary arrests, killings and inhumane treatment by the Cambodian authorities.

We appeal to the international community to take action on this inhumane treatment on Cambodian citizens.

As a matter of priority, we encourage international embassy staff to visit the detainees in prison to ensure their wellbeing.

We call on the International Textile Companies to consider the demand of the garment workers to obtain an increase of monthly wages and improvement of their working conditions.

We, the 184 undersigned Civil Society Organizations, believe that violence against citizens is never acceptable.

So far this statement has been endorsed by 184 Cambodian and International Civil Society Organizations. Full statement and list of endorsed organizations can be accessed HERE.