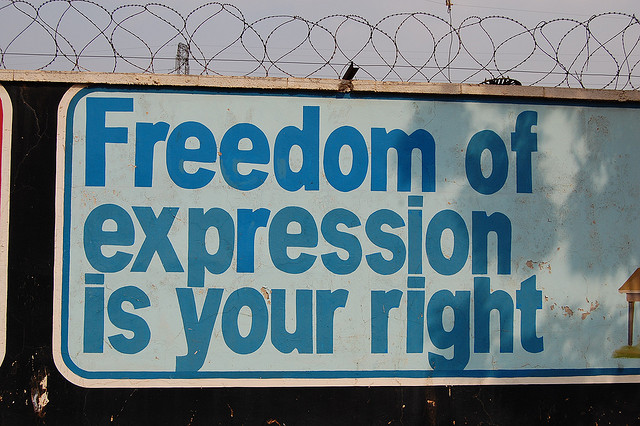 The human right to free expression and the related rights to freedom of association, peaceful assembly, thought, conscience and religion are enshrined in the Universal Declaration of Human Rights and guaranteed in the International Covenant on Civil and Political Rights (ICCPR) as well in the constitutions and other legislation of many ASEAN member states.

As the ASEAN People’s Forum (APF) is held this week in Malaysia in parallel to the ASEAN Summit of Heads of State, we call on governments across Southeast Asia to end the clampdown on freedom of expression and to halt the use of repressive laws to silence dissenting voices.

The human right to free expression and the related rights to freedom of association, peaceful assembly, thought, conscience and religion are enshrined in the Universal Declaration of Human Rights and guaranteed in the International Covenant on Civil and Political Rights (ICCPR) as well in the constitutions and other legislation of many ASEAN member states.

However, governments across the region are imposing sweeping restrictions on the right to freedom of expression through repressive legislation as well as state-sanctioned attacks and intimidation. Draconian laws, often enforced under the guise of protecting national security, target peaceful dissenters both online and offline. Human rights defenders who are working on the frontline to promote human rights as well as to expose human rights abuses by state and non-state actors continue to face attacks, threats and imprisonment for their work.

In Malaysia, the authorities have increasingly used the colonial-era Sedition Act over the past year to investigate, charge and imprison opposition politicians, activists, human rights defenders, academics, journalists, lawyers and others who have peacefully expressed their opinions that are, or are perceived by the authorities to be, critical of the government or the monarchy.

Human rights defenders in Thailand have faced prosecution, enforced disappearances, intimidation and violent attacks, including assassinations, to silence them.  Scores of community-based human rights defenders have been killed in the country since 1993, and perpetrators have frequently enjoyed impunity. Over the last decade new legislation has been passed and to restrict freedom of expression, including on the internet, and to silence peaceful critics. Since taking power in May 2014, Thailand’s military authorities have issued orders heavily restricting peaceful expression and assembly, including to ban news reports and publications under the interim constitution. Hundreds of people have been arbitrarily detained and dozens dragged before military courts for peacefully exercising their rights to freedom of assembly and expression. The military authorities have made unprecedentedly high use of the lèse-majesté law to imprison individuals in the name of security for acts which would not be considered crimes under international law. In the deep-south of Thailand, human rights activists have faced threats, detention and trumped-up charges under martial law since 2004.

The suppression of peaceful, social and religious activism is evident in Viet Nam; at least 60 prisoners of conscience remain, many of them having been convicted of peacefully expressing their views after unfair trials. Among them are bloggers, including Tran Huynh Duy Thuc, who was sentenced to 16 years’ imprisonment in 2010 after writing about political and economic issues in the country.

In Indonesia, scores of peaceful pro-independence activists from the Papua and Maluku regions remain imprisoned, some for as long as 20 years, and sometimes simply for raising or waiving a flag. Human rights defenders continue to face intimidation and threats and some have been charged under criminal defamation laws. Blasphemy laws also continue to be used to repress minority beliefs.

Human rights defenders, political activists, journalists and farmers continue to be arrested and imprisoned in Myanmar for peacefully exercising their right to freedom of expression – despite a presidential commitment to clear Myanmar’s jails of prisoners of conscience by the end of 2013.

Restrictive laws on internet use have been passed in Laos, where the state controls all media, and the enforced disappearance of civil society leader Sombath Somphone has had a chilling effect on human rights defenders in the country. And in Cambodia a draft cybercrime law has been widely criticized by civil society for vaguely worded provisions which could be used to suppress free speech and criticism of the authorities if passed.

These restrictions on freedom of expression that are sweeping across the region – using excuses such as protecting religion, the monarchy, and national security – and the silencing of dissenting voices, are troubling steps backwards. Government leaders attending the ASEAN summit in Malaysia have an opportunity to reverse this trend.

Our organizations call on ASEAN governments to respect and protect the right to freedom of expression and to repeal or amend all laws that violate these rights. Further, they should end the continued intimidation, harassment, arrest, imprisonment and other forms of attack against human rights defenders operating within their countries and allow them to carry out their work without fear of persecution. Our organizations also call for the unconditional release of all prisoners of conscience detained simply for peacefully exercising their human rights.

Note:  A workshop by Amnesty International and SUARAM on freedom of expression and human rights defenders in ASEAN was held today at the ASEAN People’s Forum 2015 in Kuala Lumpur.