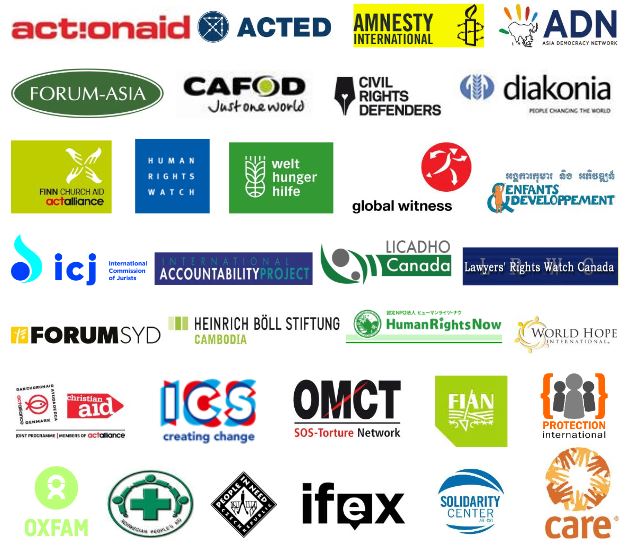 We, the undersigned international NGOs and membership organizations, call on the National Assembly of Cambodia to immediately withdraw the draft Law on Associations and Non-Governmental Organizations (LANGO).

The draft LANGO appears designed to restrict the legitimate activities of civil society and human rights defenders in violation of the right to freedom of association, a right protected by international human rights instruments to which Cambodia is a party, as well as by the country’s Constitution.

Drafted in a closed and flawed process, there has been no consultation and no opportunity to comment on an official draft of the law, despite repeated requests by civil society groups.  Calls for the government to consult civil society  (#StopandConsult) have been ignored. The draft law was withheld from the public until last week, when it was shared by a spokesperson of the Council of Ministers days after a leaked version was circulated. This process flies in the face of international standards on participation.

UN treaties and the UN Declaration on the Right and Responsibility of Individuals, Groups and Organs of Society to Promote and Protect Universally Recognized Human Rights and Fundamental Freedoms (UN Declaration on Human Rights Defenders), adopted by a consensus of States including Cambodia, protects the right of everyone, individually and in association with others, to have effective access to participation in the government of his or her country and in the conduct of public affairs. This includes the right to submit to governmental bodies concerned with public affairs, criticism and proposals for improving their functioning and to draw attention to any aspect of their work that may hinder the promotion, protection and realization of human rights and fundamental freedoms.

The draft LANGO contains 39 articles outlining a dual regulatory regime for domestic and international civil society groups under the respective aegises of the Ministry of Interior (MoI) and Ministry of Foreign Affairs and International Assistance (MoFA), with additional regulatory and oversight authority resting with other government ministries and agencies.

If passed, the draft LANGO will severely undermine the crucial role that civil society plays in Cambodia. It outlines a complicated series of bureaucratic registration and reporting obligations for civil society groups and threatens to lend legislative legitimacy to the control and censorship of activities undertaken by domestic and international associations and NGOs.

The right to freedom of association is guaranteed by Article 22 of the International Covenant on Civil and Political Rights (ICCPR), to which Cambodia is a State party, and by Article 42 of Cambodia’s Constitution. The right to freedom of association may only be limited or restricted in certain narrowly defined circumstances. Article 22 of the ICCPR provides for a three-part test for limitations on freedom of association under which no limitation on the right is permitted unless it is: (1) prescribed by a law that is clear and accessible; (2) in pursuit of a legitimate interest as outlined in Article 22;[1] and (3) is strictly and demonstrably necessary.

The LANGO contains numerous provisions that do not satisfy one or more of the three components of this test, in violation of the right to freedom of association:

Universal mandatory registration: The draft mandates registration for all domestic and international associations and NGOs operating in the country and provides for fines and criminal sanctions for groups which carry out activities without registration and, where foreign associations and NGOs are concerned, for the expulsion of foreign staff from the country. It is noteworthy that, unlike the 2011 draft of the LANGO, the current draft contains no reference to community based organizations and fails to exempt them from registration, leaving open the possibility that all groups, however small or informal, will be required to register if the draft is made law. The right to freedom of association protects associations that are not registered.[2] Rather than upholding this principle, the LANGO will provide for the punishment of individuals engaged in legitimate activities protected in the exercise of the right.

Arbitrary restrictions on founding members: To establish a domestic association or NGO, the draft LANGO requires five founding members, aged 18 years or older, who have not held leadership positions in NGOs or associations previously deleted from registration. This is an arbitrary numerical requirement[3] which unfairly and unjustifiably excludes identifiable categories of individuals from enjoying the right to freedom of association. In the case of individuals under 18 years of age, their right to freedom of association is also guaranteed by Article 15 of the Convention on the Rights of the Child, to which Cambodia is a party, subject only to similar limitations as set out in Article 22 of the ICCPR.

Onerous registration requirements: The draft LANGO outlines an onerous, bureaucratic process for the registration of domestic and international associations and NGOs, requiring the provision of excessive documentation and banking information. In the case of domestic groups, a detailed governing statute outlining, amongst other things, “sources of resources and properties” and rules for their management, must be provided to the MoI. International groups are required to provide, amongst other things, a letter outlining budgets for projects for a period of six months, together with a letter of support for all projects from a government ministry or institution. The draft includes a continuing obligation for international and domestic groups to inform authorities within 15 days of, amongst other things, changes to leadership, office location, and, in the case of domestic groups, the content of the governing statute. These requirements are extremely burdensome and do not appear to serve any legitimate interest as is required for a restriction to be in accordance with Article 22 of the ICCPR.

Arbitrary denial of registration: The draft vests complete discretion in the MoI and MoFA in deciding whether or not to accept or reject applications for registration by domestic and international groups respectively, failing to outline any objective criteria to guide the determination process.

The MoI has the discretion to determine whether an application by a domestic group “does not fulfil the conditions for registration” and has the added option of rejecting the application of a domestic group whose purpose and objective “could adversely affect public security, stability and order, or generate a threat to national security, national unity, or the culture, traditions and customs of Cambodian national society”. The MoFA must examine the content of the documentation provided by an international association or NGO and “decide whether or not it is willing to enter into a memorandum of understanding”, the document required for international groups to operate in the country.

Where a domestic association or NGO does not fulfil the conditions in a written application, the MoI must provide written notification inviting corrections to the application. However, there is no obligation to provide a written explanation for denying a corrected application, nor in the case that an application is denied on the grounds that it “could adversely affect public security, stability and order,” etc. Similarly, there is no obligation on the part of the MoFA to provide a written explanation to an international association or NGO whose application for a memorandum of understanding is denied.

Whereas a domestic association or NGO has the right to appeal a denial of registration by the MoI, no such right of appeal exists for international groups whose application for a memorandum of understanding is rejected by the MoFA.

These provisions are vague and allow considerable scope for denials of registration on arbitrary grounds.[4] Several of the justifications offered as the grounds for denying an application by a domestic association or NGO – such as maintaining national unity, or protecting culture, traditions, and customs of Cambodian national society – are overly broad and are not explicit legitimate interests as defined by Article 22 of the ICCPR.

Requirement of political neutrality: The draft LANGO requires domestic NGOs, and international NGOs and associations to “adhere to a stance of neutrality vis-à-vis political parties”, and provides for the suspension and dissolution of groups that violate this provision. The requirement of political neutrality opens the door to arbitrary government restrictions on organizations which engage in advocacy or criticism of government actions, potentially stifling legitimate criticism of political processes, draft laws and policies. As well as a violation of freedom of association, this is also a violation of the right to freedom of expression.[5]

Suspension, dissolution and termination of a Memorandum of Understanding: The draft LANGO includes sweeping provisions for the suspension and dissolution of domestic and international associations and NGOs, and the termination of the memorandums of understanding concluded by international associations and NGOs with the MoFA. Such measures may be taken by the MoI or MoFA where groups violate the principle of “neutrality”, fail to meet their reporting requirements, conduct activities “adversely affecting public security, stability and order or generating a threat to national security, national unity, or the culture, traditions and customs of Cambodian national society”, or violate their own statutes or memorandums of understanding. These sweeping provisions lack procedural safeguards, are unnecessary and so vaguely defined as to be open to abuse; for example, Article 35 of the draft LANGO provides for the termination without notice and without right of appeal of a memorandum of understanding with a foreign association or NGO that “does not act properly in accordance” with it.

The draft LANGO is a severely flawed document that should be withdrawn by the National Assembly immediately. The UN Declaration on Human Rights Defenders reaffirms that the prime responsibility and duty to promote and protect human rights and fundamental freedoms lies with the State. If the LANGO is passed, the government will be violating the right to freedom of association, a right guaranteed to all individuals by international human rights law, and the right to participate actively in the political, economic, social and cultural life of the nation, a right guaranteed in Article 35 of the country’s Constitution.

For the reasons outlined above, we respectfully call on the National Assembly to immediately withdraw the LANGO and allow Cambodia’s civil society to continue to function as a critical player in providing crucial services, supporting development and ensuring the protection and promotion of human rights.