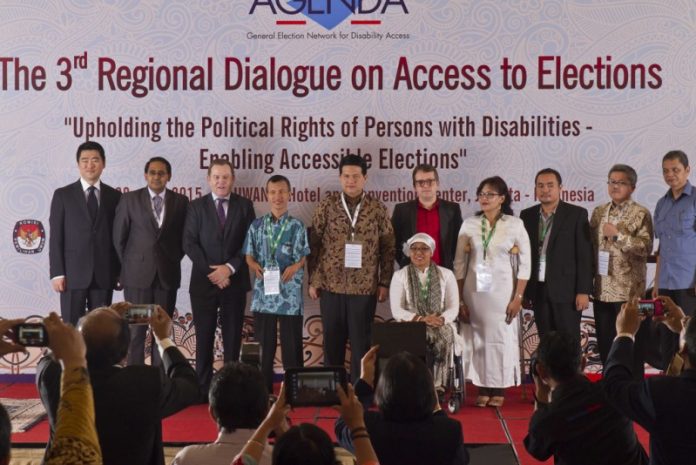 The participants in the General Election Network for Disability Access’ (AGENDA) 3rd Regional Dialogue, held in Jakarta, Indonesia on January 28-29, 2015 reaffirmed their pledge to implement the 2012 Bali Commitments on Equal Access to Elections and adopted the Jakarta Addendum to Address Overlapping Forms of Marginalization

We, members of election management bodies, disabled people’s organizations, civil society organizations, academics, and representatives from government institutions, recognize that persons with disabilities are frequently excluded from the political lives of their countries and commit to take steps to make the electoral process more inclusive, equal and accessible.

We further acknowledge that persons with disabilities represent various ethnic, religious, socioeconomic, age and gender groups. Often, the combination of multiple identities can lead to double or triple marginalization. The political participation of women in particular, is hindered by a variety of institutional, social and cultural obstacles that are often compounded by disability. Evidence suggests that a majority of the 280 million young people with disabilities in developing countries live in poverty and have low literacy skills so they are left out of civic participation initiatives. Voter education initiatives are often not conducted in accessible formats, and are even less likely to be produced in accessible formats in indigenous languages. People with disabilities from indigenous groups often encounter challenges in obtaining the citizenship documents required in order to register to vote.

We reiterate our commitment to increasing access to the political process for persons with disabilities, with a renewed focus on upholding the rights of people with disabilities who are also from marginalized groups including women, youth, and indigenous people, ethnic and religious minorities, LGBT and older people. The fulfilllment of these rights is in line with the principles proclaimed in international standards such as the UN Convention on the Rights of Persons with Disabilities, the Convention on the Elimination of All Forms of Discrimination against Women
and the UN Declaration on the Rights of Indigenous Peoples, in addition to regional instruments such as Incheon Strategy to “Make the Right Real” for Persons with Disabilities in Asia and the Pacific.

We each resolve to work to eliminate all forms of discrimination towards persons with disabilities who also identify with another marginalized group. We will work together to ensure that:

We will share experiences and outcomes of this conference with our governments, disabled persons’ organizations, civil society, the media, academia and other stakeholders when we return to our countries. We confirm our desire to continue to collaborate and share best practices and lessons learned with each other.

Established in 2011, the General Election Network for Disability Access (AGENDA) was formed as a forum to improve access to political and electoral opportunities for persons with disabilities in Southeast Asia through increased public awareness and advocacy for change. AGENDA is a creative partnership between IFES, disabled persons organizations (DPOs), and election-focused civil society organizations (CSOs. AGENDA is currently funded by the Australian Department of Foreign Affairs and Trade and the United States Agency for International Development (USAID) during the first phase of the project. The AGENDA network’s principal objectives have been to promote election access in Southeast Asia and ensure that access to disability-inclusive political processes is on the human rights agenda of regional bodies, especially the Association of Southeast Asian Nations (ASEAN).