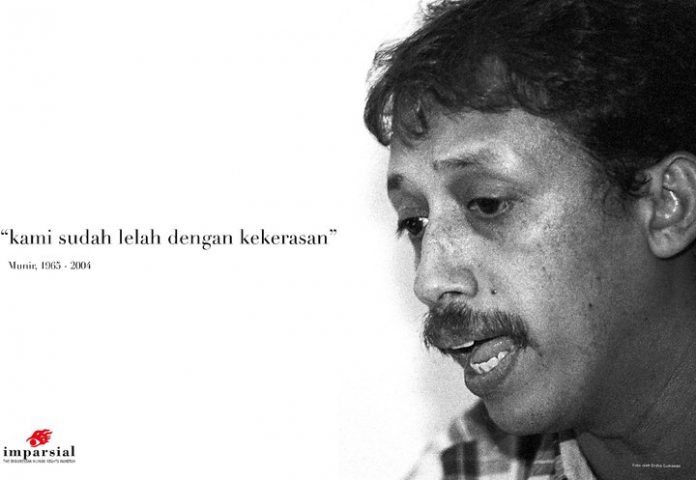 Amnesty International urges President-elect Joko Widodo (Jokowi) to ensure that his plan to resolve past human rights violations includes accountability for the killing of human rights defender Munir Said Thalib.   After struggling for a decade, the election of Jokowi has brought a glimmer of hope to Munir’s family and friends that all the perpetrators will be finally be brought to justice.

Munir was a prominent human rights campaigner in Indonesia, who took up the cause of dozens of activists who had been subjected to enforced disappearances during the last months of the Suharto government in 1998. He also played a significant role in uncovering evidence of military responsibility for human rights violations in Aceh and Timor-Leste.

Munir was found dead on a Garuda Airlines flight from Jakarta to Amsterdam on 7 September 2004. An autopsy carried out by the Dutch authorities showed that he died as a result of arsenic poisoning. Although three Garuda Airlines staff have now been convicted of the killing, there are credible allegations that those responsible at the highest levels of government have not yet been brought to justice.

In 2008, Muchdi Purwoprandjono, a former deputy director of the state intelligence agency, was acquitted of soliciting and assisting in the killing of Munir. Human rights groups found that the trial did not meet international standards of fairness after key prosecution witnesses retracted their sworn testimonies and failed to testify in court.  In February 2010, the National Human Rights Commission (Komnas HAM) also identified flaws in the police investigation, prosecution and trial of Muchdi and recommended a new police investigation.

Amnesty International urges Jokowi to initiate a new, independent investigation into the murder of Munir and bring perpetrators at all levels to justice in a manner consistent with international human rights standards. As a key step towards establishing the truth, the authorities should also make public the 2005 report of an official fact-finding team into Munir’s killing that reportedly implicated senior intelligence officers.

Jokowi should also instruct the Attorney General to conduct a review of past criminal proceedings into Munir’s killing, including alleged violations of international human rights standards.

The lack of full accountability in Munir’s case contributes to an ongoing climate of fear among human rights defenders. Despite commitments by the Indonesian government to provide adequate protection for human rights defenders – including during Indonesia’s Universal Periodic Review at the Human Rights Council in May 2012 – they continue to be threatened, intimidated and attacked for their work.

The new administration must take steps to ensure that human rights violations committed against human rights defenders are promptly, effectively and impartially investigated and that those responsible are brought to justice in fair trials. Further it should support the passage of specific legislation aimed at providing better legal protection for human rights defenders.
In 2004, President Susilo Bambang Yudhoyono stated the resolving Munir’s killing would be a “test of our history”, for Indonesia’s democratic reform process. Many Indonesians now believe that he has failed this test. It is our hope that Jokowi’s human rights record will be better, and that Munir’s family’s long wait for justice will soon be over.

An Amnesty International petition to President-elect Jokowi calling for accountability for Munir’s killing can be found at campaigns.amnesty.org