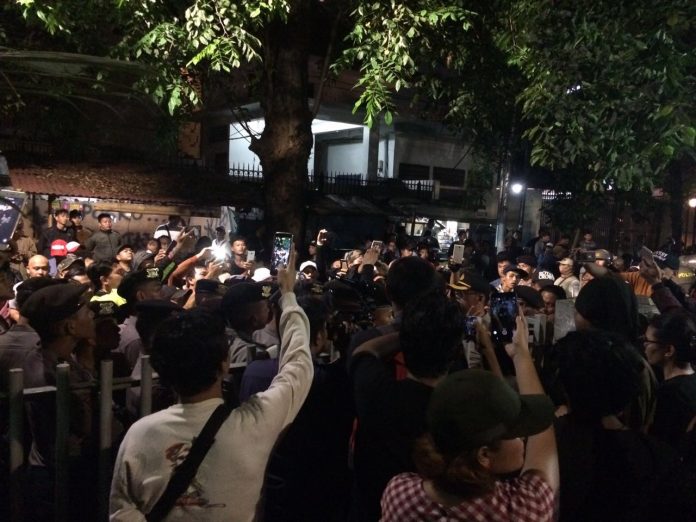 (Jakarta/ Bangkok, 18 September 2017) ‐ The Asian Forum for Human Rights and Development (FORUMASIA)
expresses grave concern over the forced dispersal of an academic discussion on the human rights
violations of 1965‐55 at the Indonesian Legal Aid Foundation (YLBHI) building, which houses the Jakarta
Legal Aid (LBHI) office, by the Indonesian Police on 16 September 2017. FORUM‐ASIA further strongly
condemns the inaction of the police on intimidation and threats of hundreds of protesters who
surrounded the LBH Jakarta office on the night of 17 September 2017 following a solidarity event held by
LBH Jakarta calling for actions to save democracy.

A half‐century after the 1965‐66 massacre, which resulted in an estimated 500,000 people associated with
the Communist Party of Indonesia (PKI) being killed in a widespread and systematic manner, efforts to
reveal the truth are still being thwarted. Despite President Joko Widodo, better known as Jokowi’s
promises to prioritise reconciliation, it remains a controversial topic.

Following the forced dispersal of a seminar, ‘Revealing Historical Truth about the 1965‐66 Events’,
scheduled to be held at the YLBHI building on 16‐17 September 2017, LBH Jakarta, the main organiser of
the event, stated that information on the event has been provided to the Indonesian Police on 15
September 2017. However, the Indonesian Police gathered around LBH Jakarta office on the morning of
16 September, blocking participants from entering the venue. The seminar was targeting academics and
survivors of the 1965‐66 massacre, most of whom are now elderly. The academic discussion aimed at
clarifying facts and support President Jokowi’s supposed commitment to addressing past human rights
violations.

The Indonesian Police forcefully dispersed the discussion, by raiding the building without any formal
letter, removing the banner of the event, and intimidating LBH Jakarta’s lawyers. This is the first time the
police dared to forcibly enter and raid YLBHI building in such a manner. Something which had not even
happened during the New Order era of President Suharto.

After the solidarity event of LBHI Jakarta, hundreds of people gathered around the YLBHI building
overnight on 17 September, throwing rocks and yelling ‘kill and burn the communists’. The complete
inaction of the police to stop this violence, contributes to the erosion of democracy and violations of the
rights to freedoms of expression and assembly in Indonesia.

‘As a democratic country, it is the fundamental duty of the State to ensure the safety and security of its
people to peacefully express their views and assemble without fear, as guaranteed under the International
Covenant on Civil and Political Rights (ICCPR), which Indonesia ratified in 2005 and the Constitution of
Indonesia. The Indonesian Police should take actions in accordance with the rule of law against people
engaging in violence’, says John Samuel, Executive Director of FORUM‐ASIA.

FORUM-ASIA stands with its members, namely YLBHI, and civil society coalitions in Indonesia, calling on
the Government of Indonesia to guarantee the rights of freedoms of expression and assembly. More so,
FORUM-ASIA calls for the creation of an independent body to safeguard against and monitor the sanctioning
of all parties who have been involved with violent misconduct of the Indonesia Police.

FORUM‐ASIA is a regional human rights group with 58 member organisations in 19 countries across Asia.
FORUM‐ASIA has offices in Bangkok, Jakarta, Geneva and Kathmandu. FORUM‐ASIA addresses key areas
of human rights violations in the region, including freedoms of expression, assembly and association,
human rights defenders, and democratisation.