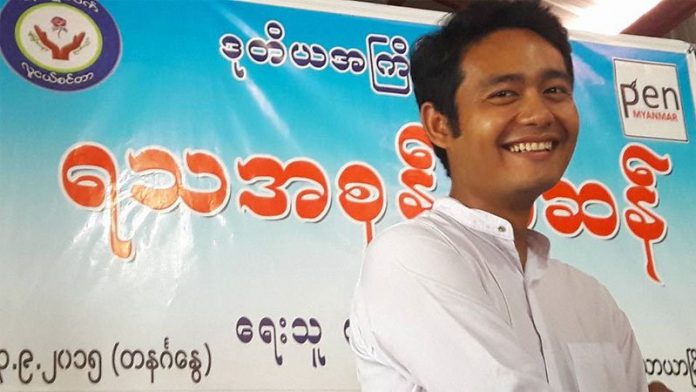 Maung Saungkha writes subversive poems and he stated that the “president” in his poem refers to all presidents in the world who are oppressing people.

Maung Saungkha is a Burmese poet and pro-democracy activist. On 8th October 2015, he wrote a poem about having a portrait of a president tattooed on his penis. He posted the poem on Facebook. Former President Thein Sein’s spokesperson Zaw Htay saw the Facebook post and called for his prosecution and on the same day, police arrived at his house to arrest him. When he heard the charges had been filed against him, he went into hiding.

After nearly four weeks on the run, he was arrested on 5th November 2015 and sent to Insein prison. Since then he has been charged under Article 66(d) of the Telecommunications Act for defamation. He is currently being detained in Insein prison while his trial continues.

Maung Saungkha writes subversive poems and he stated that the “president” in his poem refers to all presidents in the world who are oppressing people. He stated that he doesn’t have a wife or the tattoo. He said, “Even though it is said we have freedom of expression, now they charged me because I wrote a poem.”

The rough translation of his poem “Image” is: “I have the President’s portrait tattooed on my penis/ How disgusted my wife is.”

While in hiding he continued posting poems on Facebook and said, “you can imprison poets but you can never imprison poems.”

“Maung Saungkha has already been in prison for more than six months just for writing a little poem,” said Wai Hnin, Campaigns Officer at Burma Campaign UK. “He has every right to exercise his freedom of expression and he shouldn’t be thrown into jail for his writing. The NLD-led government must ensure the immediate and unconditional release of Maung Saungkha.”