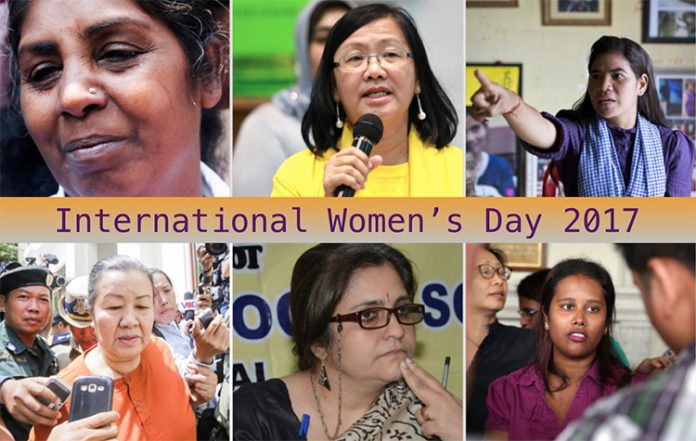 The Asian Forum for Human Rights and Development (FORUM-ASIA) joins the international community in commemorating International Women’s Day and celebrating the fundamental principles of equality and non-discrimination. On this special day, FORUM-ASIA pays tribute to all the courageous women who have contributed to the advancement of human rights around the world.

While all human rights activists face increasing threats and risks, women working in the human rights field are confronted by additional challenges. Attacks against women, especially when working on gender issues, often take gender-specific forms, which in most cases escalate into sexual-related threats and harassments. Because of their fundamental role in promoting and defending freedoms and rights, women continue to be targeted, arrested, detained, and prosecuted for their human rights work by repressive regimes across Asia.

In India, Teesta Setalvad, a renowned human rights activist and founder of Sabrang Trust and Citizens for Justice and Peace (CJP), has been a victim of judicial harassment since 2013. The judicial proceedings, which are believed to be politically motivated, are an attempt to repress Teesta’s legitimate work in the defence of human rights in India. Moreover, the licences of Sabrang Trust and CJP were cancelled in December 2016, together with other thousands NGOs, in an unprecedented crackdown on the right to freedom of association in India.

In Sri Lanka, Balendran Jeyakumari, a prominent campaigner against enforced disappearances, whose son went missing during Sri Lanka’s civil war, has been targeted and detained under the draconian Prevention of Terrorism Act (PTA) for trying to shed light on the fate of missing persons after the civil war. She is currently out on bail, advocating for her rights and the ones of other thousands of families in the North of Sri Lanka.

In Malaysia, well-known activist Lena Hendry, has been found guilty two weeks ago for screening a documentary film on human rights violations committed during the civil war in Sri Lanka. Lena has also been involved with the Bersih Movement, led by Maria Chin Abdullah. Maria, a veteran activist, was detained under the Security Offenses Special Measures Act 2012 (SOSMA) for a few days on the eve of the Bersih 5.0 rally in November 2016. Lena and Maria have both being criminalised for exercising and promoting the fundamental rights to freedoms of expression, peaceful assembly and association.

In Cambodia, Tep Vanny, one of the country’s most vocal land rights defenders, is repeatedly targeted for her brave activism. She is currently facing three different trials, aiming at silencing her legitimate expression of dissents and requests for justice. Another brave women human rights defender, Lim Money, Senior Investigator of Women and Children’s Rights Programme at the Cambodian Human Rights and Development Association (ADHOC), is currently arbitrarily detained together with four current and former colleagues. The five have already spent more than 300 days in prison.

In Pakistan, less than two years ago, social activist Sabeen Mahmud was brutally shot while driving her car sitting next to her mother. Sabeen was murdered after leaving an event she hosted about the human rights situation in Balochistan. The murder of Sabeen and other women human rights defenders in Asia showcases the dangerous climate that women face while promoting human rights values, and the importance of ensuring that all cases are investigated with due process.

The struggle for human rights of Teesta, Jeyakumari, Lena, Maria, Vanny, Lim, and Sabeen exemplifies the pivotal role played by women all over Asia in the human rights movement. Without their involvement and engagement, efforts to challenge authoritarian regimes and repressive laws would not stand a chance.

As the world joins hands together to celebrate, support, and motivate women around the world, FORUM-ASIA reiterates its call to all Asian Governments to halt the criminalisation and harassment of all women human rights defenders and human rights defenders. Today more than ever, FORUM-ASIA expresses its continuous support and solidarity to all movements and women striving for a more just, equal, and sustainable society.