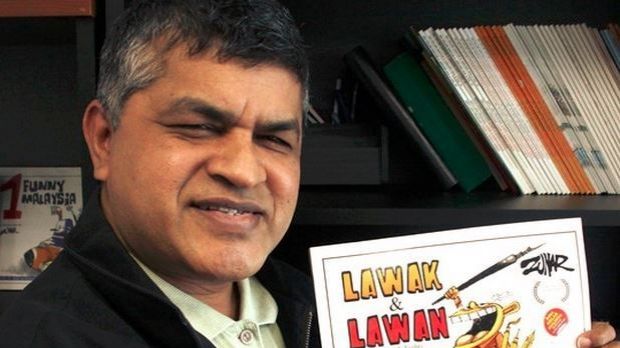 The Malaysian government must immediately end the harassment of renowned cartoonist Zunar and drop all charges against him, FIDH and its member organization Suara Rakyat Malaysia (SUARAM) said today.

(Kuala Lumpur, Paris) The Malaysian government must immediately end the harassment of renowned cartoonist Zunar and drop all charges against him, FIDH and its member organization Suara Rakyat Malaysia (SUARAM) said today.

“The arbitrary arrest of Zunar is the latest deplorable act of harassment by a government that is intolerant of any form of peaceful dissent. Zunar should never again be harassed or deprived of his liberty for exercising his basic right to freedom of expression.”
Dimitris Christopoulos, FIDH President

On 26 November 2016, at approximately 6:00pm, police in George Town, Penang State, detained Zulkifli Anwar Ulhaque, better known as Zunar, under Article 4(1)(c) of the 1948 Sedition Act (publication of ‘seditious’ material) and Article 504 of the Criminal Code (‘intentional insult with intent to provoke a breach of the peace’). [1] On the morning of 27 November 2016, the George Town Magistrate’s Court approved the police request to remand Zunar for an additional 24 hours for further investigation. However, Zunar was released on the same day at 7:00pm.

Police had arrested Zunar as he reported himself to the Patani Road police station a day after the local ruling United Malays National Organization (UMNO) party’s Youth Chief Mohamed Norhiesam Ismail filed a complaint against Zunar in relation to his cartoon exhibit at the George Town Literary Festival, which opened on 25 November 2016. The exhibit featured several cartoons portraying Prime Minister Najib Razak.

On 25 November 2016, at approximately 2:30pm, a mob of about 30 people led by another local UMNO Youth Chief, Rafizal Abdul Rahim, stormed Zunar’s exhibit, physically attacked Zunar and took down some of the cartoons on display. Malaysia’s riot police, the Federal Reserve Unit (FRU), intervened to restore calm. As a result of the attack, Zunar decided to cancel the exhibit, which was expected to run until 27 November 2016.

“Zunar has every right to display the cartoons that have earned him numerous international honors without hindrance by the authorities or pro-government elements. Authorities must respect Zunar’s fundamental rights to freedom of expression and freedom of movement and investigate those responsible for the recent mob attack against him.”
Sevan Doraisamy, SUARAM Executive Director

The events of 25-27 November are the latest in a series of acts of judicial harassment targeting Zunar.

On 17 October 2016, Malaysian immigration authorities at Kuala Lumpur International Airport prevented Zunar from leaving the country to travel to Singapore. According to Zunar, the Inspector-General of Police (IGP) Khalid Abu Bakar issued the travel ban with effect on 24 June 2016.

On 10 February 2015, Zunar was detained for three days on charges of sedition. The charges under the colonial-era law stemmed from tweets he had posted on the same day, which suggested the Federal Court’s decision to uphold the conviction of opposition leader Anwar Ibrahim earlier in the day was politically motivated. Zunar’s trial is expected to begin on 24 January 2017. If found guilty on all nine counts of sedition, Zunar could be sentenced to 43 years in prison.

In addition, on 28 January 2015, while Zunar was on a speaking tour in the UK, police raided his office in Kuala Lumpur and confiscated 155 copies of two of his publications, “Pirates of the Carry-BN” and “Conspiracy to Imprison Anwar.”

Zunar is the recipient of numerous international awards, including the “2016 Cartooning for Peace Award” and the “2015 International Press Freedom Award.” He also volunteered to contribute to the FIDH Comic Strip Reports in 2013 and 2015.

[1] Article 4(1)(c) of the 1948 Sedition Act states: “Anyone who prints, publishes, sells, offers for sale, distributes or reproduces any seditious publication shall be guilty of an offense and shall, on conviction, be liable for a first offense to a fine not exceeding five thousand ringgit or to imprisonment for a term not exceeding three years or to both […].” Article 504 of the Criminal Code states: “Whoever intentionally insults, and thereby gives provocation to any person, intending or knowing it to be likely that such provocation will cause him to break the public peace, or to commit any other offense, shall be punished with imprisonment for a term which may extend to two years, or with fine, or with both.”