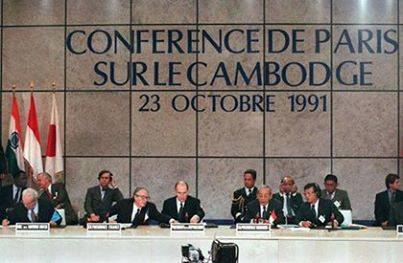 We, the undersigned civil society organizations, are deeply concerned by the escalating political crisis in Cambodia and call for a halt to all government repression of opposition voices, and a concerted international effort to ensure the fulfillment of the commitments enshrined in the Paris Peace Accords on Cambodia, signed 25 years ago this week.

PHNOM PENH, 20 October 2016 — We, the undersigned civil society organizations, are deeply concerned by the escalating political crisis in Cambodia and call for a halt to all government repression of opposition voices, and a concerted international effort to ensure the fulfillment of the commitments enshrined in the Paris Peace Accords on Cambodia, signed 25 years ago this week.

The four instruments that form the Framework for a Comprehensive Political Settlement of the Cambodia Conflict, commonly referred to as the Paris Peace Accords, were signed on 23 October 1991, marking the end of more than a decade of conflict and laying the groundwork for free elections, which took place in 1993. The accords were signed by 19 states, including nine of the ten current ASEAN member-states, and include guarantees of political pluralism and respect for human rights.

The past year and a half has been marked by a worsening disregard for the democratic principles enshrined in the Paris Peace Accords. Despite recent developments suggesting the possibility of an easing in political tensions, there is widespread concern that as the country builds towards elections in 2017 and 2018 the situation, if neglected, will decline further, leading to a complete collapse of the settlement agreed in Paris a quarter of a century ago.

Since the ruling party controversially declared victory in the hotly contested elections of 2013, we have witnessed repeated attacks on opposition voices: NGO workers, land rights activists, opposition party members, and even members of parliament have been arrested, charged, and imprisoned. The courts and other theoretically independent institutions have been effectively weaponized to target and silence dissenting voices. As the crisis has escalated, Cambodia’s core institutions, including the judiciary, have abandoned any pretense of political independence, setting Cambodia on a dangerous path to conflict.

Leader of the opposition Cambodia National Rescue Party (CNRP), Sam Rainsy, was stripped of his seat in the National Assembly last November and forced into exile as a result of charges brought against him by a member of the ruling party. Deputy Opposition Leader Kem Sokha has been under effective house arrest at the CNRP headquarters in Phnom Penh since 26 May 2016. On 9 September 2016, he was sentenced in absentia to five months in prison for failing to appear in court. Two further opposition lawmakers—Um Sam Ann and Hong Sok Hour—have been imprisoned as they await trial, while two others were beaten by a mob including members of the Prime Minister’s Bodyguard Unit in October 2015.

In a welcome development, a political “ceasefire” announced by Prime Minister Hun Sen in late September has led to a thawing of political relations, and opened the door for negotiations that could lead to the release of political prisoners and the amendment of laws which contravene Cambodia’s human rights obligations. It is essential that these steps are taken if Cambodia is to fulfill its obligations set out in the Paris Peace Accords.

The persecution has been extended to members of civil society deemed to be critical. Lim Mony, Ny Sokha, Yi Soksan and Nay Vanda, four staff from the Cambodian Association for Human Rights and Development (ADHOC), the country’s oldest human rights organization, have been charged and remain imprisoned for their legitimate human rights work. A member of the National Election Committee and former staff of ADHOC, Ny Chakrya, was also charged in the same case and has already been sentenced in a second case on charges of defamation. Land rights defenders and environmental activists have also faced prison sentences including Tep Vanny, who remains in pretrial detention since 17 August on separate charges relating to a Boeung Kak Lake community protest in 2013. Tep Vanny was also convicted for her involvement in Black Monday protests to free detained ADHOC staffers. In July, prominent political analyst and outspoken government critic Kem Ley was murdered in broad daylight in Phnom Penh casting a chilling effect on civil society space.

In 2015, the Government has passed a number of laws that further restrict freedom of expression and freedom of assembly and association in the country. Despite international, and national outcry, the Law on Associations and NGOs (LANGO) was passed by the National Assembly in 2015. The Law is considered an attempt by the Government to silence non-governmental organizations and community-based groups while creating an atmosphere of intimidation and self-censorship. In December 2015, the Law of Telecommunications, which provides sweeping powers to the Government for surveillance and criminalization of the use of telecommunication devices deemed to affect national security and public order, was passed despite the boycott of the opposition party in the National Assembly. The surveillance and right to privacy are severely jeopardized under the Law. Conversations allegedly by opposition party leader, Kem Sokha were leaked on the internet and used to criminalize and restrict his political activities.

Early this year, the Law on Trade Unions was adopted under heavy criticism from local and international labor movements and human rights groups. Certain provisions under the Law could be used to undermine the right to freedom of association which is a core idea of labor mobilization. The passing of these repressive legislations was also strongly criticized for lack of transparency and broad consultation.

The worsening state of freedoms of association, assembly and expression was well reflected at the UN Human Rights Council. During the June and September sessions many states flagged these issues. The September session saw 39 states jointly raising concern over the disintegration of these freedoms in Cambodia. The UN Special Rapporteur on Cambodia took note of this dire situation in her address to the Council and said that freedom of assembly and association will be a priority in her efforts.

We urge the Government of Cambodia to drop charges and release all human rights defenders who are being criminalized for doing their legitimate work, and ask the Government to conduct an independent investigation into the killing of Kem Ley. Repressive laws must be amended to be in compliance with international human rights standards.

It is critical that elections take place in a context in which they are able to reflect the will of the Cambodian people. We are concerned that continued harassment of the opposition will undermine the prospect of a free and fair vote and that a further escalation of the crackdown may even see attempts to prevent elections taking place at all. The Paris Peace Accords laid the groundwork for democracy in Cambodia, and it is critical that the Cambodian people are able to fully enjoy the fruits of that democracy, including the ability to determine their own political future.

The Accords stipulated that “Cambodia will follow a system of liberal democracy, on the basis of pluralism” with “periodic and genuine elections” and “a requirement that electoral procedures provide a full and fair opportunity to organize and participate in the electoral process.”

Moreover, as part of this historic agreement, the eighteen other signatories undertook “to promote and encourage respect for and observance of human rights and fundamental freedoms in Cambodia as embodied in the relevant international instruments in order, in particular, to prevent the recurrence of human rights abuses”.

The anniversary of the Paris Peace Accords is an opportunity for all Cambodians, as well as the international community, to recall and renew their efforts to fulfill the commitments made to secure a peaceful and democratic future for Cambodia. We must work together to ensure that Cambodia moves forward along the path laid out in the Paris Peace Accords, and follows through on recent encouraging steps. That means ending attacks on critical voices, allowing free and fair elections, and working to secure a peaceful and prosperous future for all Cambodians.