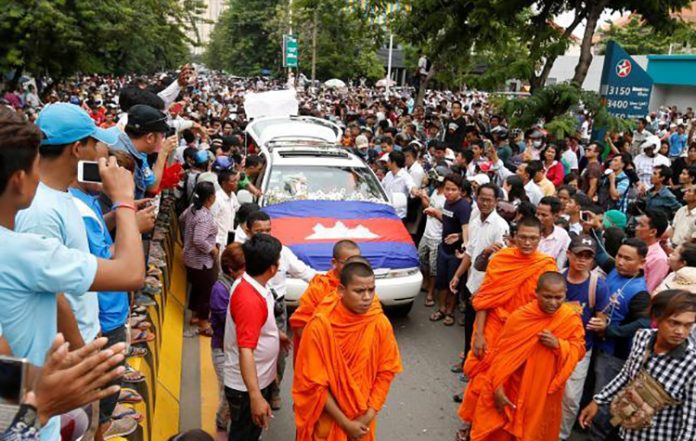 We call on the ASEAN Intergovernmental Commission on Human Rights (AICHR) to fulfil its purpose to protect human rights and fundamental freedoms of the ASEAN people, as stipulated by its Terms of Reference, at this critical juncture for human rights and democracy in Cambodia.

(13 July 2016) – We, the undersigned organisations, are deeply shocked by the murder of Kem Ley, a prominent Cambodian activist, political analyst, and government critic, on 10 July 2016. We strongly condemn Kem Ley’s murder and express our condolences to his family. We call for a prompt, thorough, impartial, and independent investigation into his death, and call on the authorities to ensure accountability for this atrocious killing.

Kem Ley was shot dead on the morning of 10 July 2016 at a gas station’s coffee shop, which he regularly frequented on Monivong Boulevard, a major thoroughfare in Phnom Penh. The alleged perpetrator was immediately arrested and authorities claimed he confessed in a leaked video to killing Kem Ley over an unpaid debt. However, suspicions of underlying political motives behind Kem Ley’s death remain strong. Kem Ley’s wife has vehemently denied that her husband had any debts whatsoever. Further, Kem Ley was often critical of Cambodia’s ruling party. Before he was killed, Kem Ley had commented on the business interests of Hun Sen’s family, reportedly worth at least US$ 200 million.[1]

Bystanders surrounding Kem Ley’s body after his death refused to allow authorities to remove his body from the crime scene over fears that the police would contaminate or destroy evidence. Thousands of people gathered in the streets of Phnom Penh when Kem Ley’s family transported his body to Wat Chas pagoda, Phnom Penh, in the afternoon of 10 July.

Kem Ley’s death is a tragic loss for civil society, in both the country and the region. He was a prominent and brave political commentator and a strong advocate of democracy, good governance, and human rights in Cambodia, who worked closely with grassroots movements. In 2014, Kem Ley founded a grassroots advocacy group called ‘Khmer for Khmer’, aimed at encouraging the formation of grassroots-based political parties across Cambodia.

Kem Ley’s killing occurred amid a sharp deterioration in the space for fundamental freedoms in Cambodia over the past year. Civil society group members, opposition leaders, and government critics have been arrested and subjected to judicial harassment, and in some cases, violence.

Cambodia’s deteriorating human rights situation has resulted in widespread international condemnation of the Cambodian authorities, including at debates at the UN Human Rights Council, which concluded its 32nd session at the beginning of this month. The killing of Kem Ley has only added to concerns over the situation in Cambodia, after the arbitrary arrest and detention of five human rights defenders in May 2016 on trumped-up charges.

We remind the Cambodian Government that the state has a responsibility to ensure a safe and enabling environment for human rights defenders, civil society, and government critics to freely operate without fear of retaliation. We are highly concerned that this space is under severe threat in Cambodia. We therefore call on the UN Special Rapporteur on the situation of human rights in Cambodia, Ms. Rhona Smith, to take urgent note of this serious development and exercise her mandate to adequately respond to the increasing threats faced by civil society. We also call on all member states of the UN Human Rights Council to continue to closely observe the situation in the country in the lead-up to the Council’s discussion on Cambodia in September.

We call on the ASEAN Intergovernmental Commission on Human Rights (AICHR) to fulfil its purpose to protect human rights and fundamental freedoms of the ASEAN people, as stipulated by its Terms of Reference, at this critical juncture for human rights and democracy in Cambodia.

Lastly, we call on the international community to support Cambodia’s civil society in their campaigns to obtain the immediate release all political prisoners and an end to all human rights violations, including judicial harassment and attacks on human rights defenders and organisations working for the protection of human rights, democracy, and sustainable development.