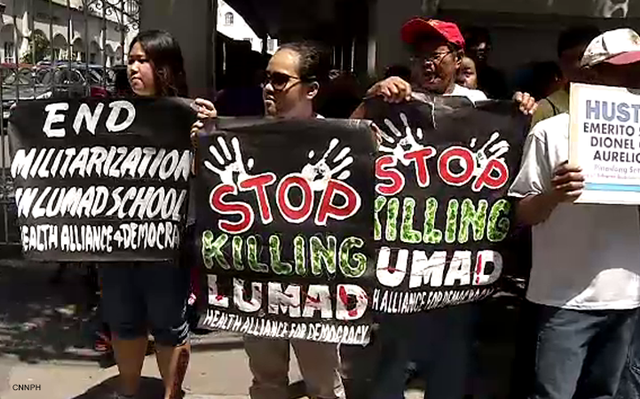 We urge you not to let Lito Abion and the three Higaonon men just be part of the statistics of unresolved cases of killed and abused Lumad human rights defenders and community members.

Re: Calling for immediate end to continued killings of and other abuses against Lumad (indigenous) peoples in Mindanao

It is with extreme alarm that we received a report that another Lumad leader and human rights defender, Lito Abion, was killed on 28 September in San Luis, Agusan del Sur in Mindanao. On the same day in Claveria, Misamis Oriental, military troops reportedly tortured three Higaonon civilians in the course of an armed encounter between the Armed Forces of the Philippines (AFP) and the rebel New People’s Army (NPA). These incidents occurred while a credible investigation on the spate of killings and other abuses of Lumad leaders and community members and advocates over the last few months is yet to take place.

There is a common thread that connects all these killings:

Lito Abion, a member of the indigenous peoples’ organization Tagdumahan that has been resisting entry of mining operations in the ancestral lands of Banwaon and Manobo peoples in the province, had recently returned from a self-imposed sanctuary since 2005. At that time, a certain Mario Napungahan, a tribal leader and former NPA member who was later recruited as a member of the Civilian Auxiliary Force of the Philippine Army, wanted to merge his Certificate of Ancestral Domain Title (CADT) with that of the Tagdumahan’s. He accused Tagdumahan leaders and members who refused to sign the application for a unified CADT as supporters or members of the NPA. Later, four Tagdumahan leaders were killed, forcing Abion to seek sanctuary.  When he returned to his community in 2014, Abion was earning a living as a habal-habal (motorcycle for hire) driver. He was shot dead by two unidentified gunmen last September 28.

On the same day, the three Higaonon men were gathering wild plants to use for various purposes like medicine, spice, among other things, in Balahan where there was a gunfight between the AFP and the NPA. They had taken cover when they heard gunfire and went out of their hiding place after the gunfight. The military troops saw and apprehended them, then accused them of being members of the NPA. They were abused, beaten and tortured. The military took their photos and their fingerprints, and ordered them to sign a paper – the contents unknown to them – before finally releasing them.

We urge you not to let Lito Abion and the three Higaonon men just be part of the statistics of unresolved cases of killed and abused Lumad human rights defenders and community members. At least thirteen have been allegedly killed by the Philippine Army and paramilitary troops in the past eight months. With Abion, a total of sixty-nine indigenous persons have been killed under your regime with hundreds of cases of harassments and arbitrary detentions and displacement of thousands of Lumads now living in evacuation camps across the region.

We recall that in response to the killings of three human rights defenders – a school director and two tribal leaders – in Surigao del Sur also in September, UN Special Rapporteurs on the rights of indigenous peoples and on the situation of human rights defenders had called on the Philippine Government to launch a full and independent investigation into the killings. The Rapporteur on extrajudicial, summary or arbitrary executions also endorsed the call. We welcome that the Department of Justice has initiated an investigation into the transgressions against the Lumads of eastern and northern Mindanao in response to pressure inside and outside the Philippines on the issue.

We call for an independent and transparent investigation to be conducted and broadened to look into the roles of not only the paramilitaries but also the Philippine army in the violence against the Lumads across Mindanao and the root causes of the transgressions in the region.

Further, we appeal to you to take immediate measures to disband all paramilitary groups, whether these are within the investment defense forces or not, and revoke the Executive Order 546, which legitimizes formation of such paramilitary groups.

Mr. President, as you move forward with the peace process in Mindanao, let not the Lumad people be left behind. May your efforts in peace building be inclusive of addressing the Lumad peoples’ plight by fully implementing your commitments to the UNDRIP and the Outcome Document.

We call for your swift action on the matter.

Submitted by email to:
H.E. Benigno S. Aquino III, President of the Republic of the Philippines, corres@op.gov.ph / opnet@ops.gov.ph