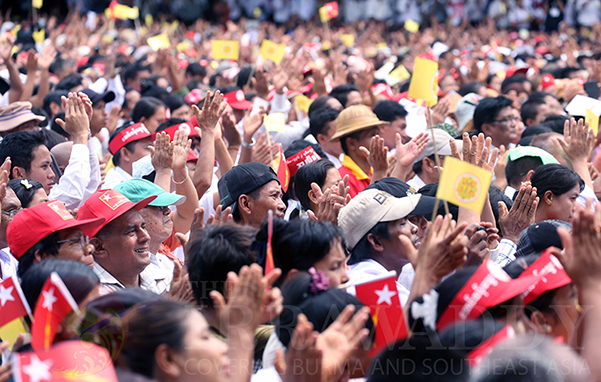 The National League for Democracy (NLD) and 88 Generation Peace and Open Society have been campaigning actively and vociferously for various amendments to the military-drafted 2008 Constitution.  Over the weekend, thousands of supporters came out in support of mass rallies for constitutional reform held in Rangoon and Mandalay on Saturday and Sunday, respectively.  It is the first time that the two pro-democracy parties have co-hosted an event.

The National League for Democracy (NLD) and 88 Generation Peace and Open Society have been campaigning actively and vociferously for various amendments to the military-drafted 2008 Constitution.  Over the weekend, thousands of supporters came out in support of mass rallies for constitutional reform held in Rangoon and Mandalay on Saturday and Sunday, respectively.  It is the first time that the two pro-democracy parties have co-hosted an event.
The two parties explicitly identified Article 436 of the Constitution as the number one priority for constitutional amendment, ensuring that their audiences were left in no doubt as to its significance.  Article 436 currently requires the approval of at least 75% of the members of both houses of Parliament to amend the Constitution.  This clause, by definition, therefore lies at the heart of the issue of constitutional reform.  Without amending it, or abandoning it altogether, it will prove very difficult to amend other controversial provisions, such as Article 59(f), which effectively prohibits Daw Aung San Suu Kyi from running for President in the 2015 national elections.  Furthermore, Article 109(b) provides for a 25% military allocation in Parliament, which works in conjunction with Article 436 to ensure that the military has a de facto veto on any constitutional amendment.  One would expect it to be particularly keen to block any amendment of Article 109(b), another of the most high profile targets for constitutional reform.
Article 436 is therefore the first domino: if the NLD and 88 Generation can work out a way of toppling that one provision, then the rest will follow.  That is the thinking anyway, and the NLD and 88 Generation should be commended for their clear and simple strategy.  But how to convince the military and President Thein Sein’s government to compromise on Article 436?  That is the hard part.  It is hoped that such public shows of unity and resolve as Rangoon and Mandalay have seen over the weekend will create a groundswell of such momentum that it will be hard to stop.  The NLD and 88 Generation are working effectively together to get the people onside.
However, President Thein Sein has warned of unrest as Burma prepares to amend the military-drafted 2008 Constitution and hold free and fair national elections in 2015.  The NLD, 88 Generation, their supporters and the wider population of Burma should not be put off by such flagrant scaremongering.  In fact, the danger of unrest becomes a much more likely proposition in the event that the military digs its heels in, in the event that the elections are not free and fair and constitutional reforms are not allowed to happen.
No one wants to see a return to the past, to the events of 1988-90.  But if the people of Burma start to get a sense of “déjà vu”, if it seems that, once again, the military are looking after their own interests rather than those of the people, if it is clear that, once again, the people are being prevented from choosing their leader and political representatives in accordance with genuine democracy, then there is a significant risk of unrest.  The desire for democracy is as strong as it was in 1988; the difference now is that people expect more.  If their will is frustrated, a rocky road lies ahead.
The international community should continue to use sticks and carrots to cajole the Burma Government into smoothing Burma’s path to genuine democracy.  Efforts must be made to reassure the Burma Army that change is to its benefit also, that it has a role to play and a stake in the new Burma.  President Thein Sein and his government need to show some courage, as they did in 2011, and have faith in the people of Burma.  The alternative is too troubling to contemplate – and that is not scaremongering.  The NLD and 88 Generation, for their part, should continue to apply pressure, rally support and build trust with the Burma Government.  This is an opportunity to show that a government shouldn’t fear opposition, that opposition is a valuable component of a strong democracy.  On the other hand, both parties are guilty of being blind to other pressing issues, such as the dire situations in Kachin and Arakan State.  All relevant players, including the NLD and 88 Generation as well as the Burma Government and Burma Army, should try to build trust with political representatives of all ethnic groups.  Everyone’s focus should be on the whole of Burma.  Only then can genuine reconciliation and nation-building be achieved for all.
Source: www.burmapartnership.org
Image Source: www.burmapartnership.org

The Government of Myanmar