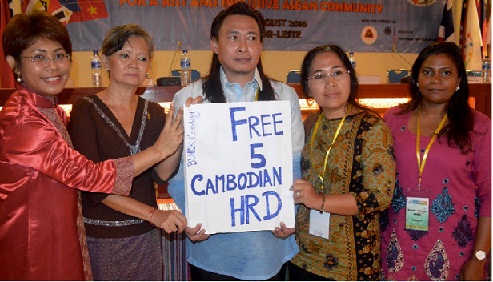 Parliamentarians from across Southeast Asia today called for the immediate and unconditional release of five human rights defenders (HRDs) currently detained and facing charges in Cambodia.

Joining with more than 50 national, regional, and international civil society organizations to launch a renewed push to secure their freedom, ASEAN Parliamentarians for Human Rights (APHR) condemned the ongoing imprisonment on trumped-up charges of a member of the National Election Commission (NEC) and four staff from the Cambodian Human Rights and Development Association (ADHOC), a prominent national NGO. MPs called for an end to their judicial harassment and for the international community to rally in support of the five HRDs, who have now spent over 100 days in pre-trial detention.

“We must be unequivocal in our support for their release. No one should be subjected to arbitrary arrest or imprisonment, and civil society members should never be put at risk for doing their job,” said APHR Chairperson Charles Santiago, a member of the Malaysian Parliament.

“The charges in this case are plainly politically motivated and have further undermined the already weak rule of law in Cambodia. Authorities must free the five HRDs if they hope to have any chance of salvaging their international credibility.”

The four ADHOC staff members — Ny Sokha, Yi Soksan, Nay Vanda, and Lim Mony — were arrested on 28 April, along with NEC Deputy Secretary-General Ny Chakrya, and charged four days later for allegedly bribing a witness in an ongoing case against Deputy Opposition Leader Kem Sokha. Their initial appeal for bail was denied on 13 June, and they face up to ten years in prison if convicted.

“Cambodian authorities are making a mockery of justice by pursuing the case against these individuals,” Santiago said. “The outrageousness of putting NGO workers on trial for providing legitimate legal assistance to a citizen in need has been exacerbated by the fact that the courts are clearly being used by the government to pursue a political agenda.”

The imprisonment of the five HRDs has come in the context of a political environment in Cambodia that has become increasingly hostile toward civil society. In the past year, Cambodia has seen a sharp rise in harassment, intimidation, and attacks against opposition and independent voices, along with a spike in the number of political prisoners detained. The 10 July killing of prominent political commentator Kem Ley, raised additional concerns about the safety of civil society actors.

“We have been witnessing an all-out assault on civil society in Cambodia,” said Eva Kusuma Sundari, a member of the Indonesian House of Representatives. “This must end. Authorities have a duty to ensure that civil society groups — including those critical of the government — have the space to operate free from persecution and intimidation.”

“To the five who remain in prison in violation of their fundamental rights: Know that we have not forgotten you and we stand with you in solidarity,” said Cambodian National Assembly member Mu Sochua.

“We will continue to call for your release and push forward toward a future for Cambodia where human rights are protected and the will of the people is respected.”