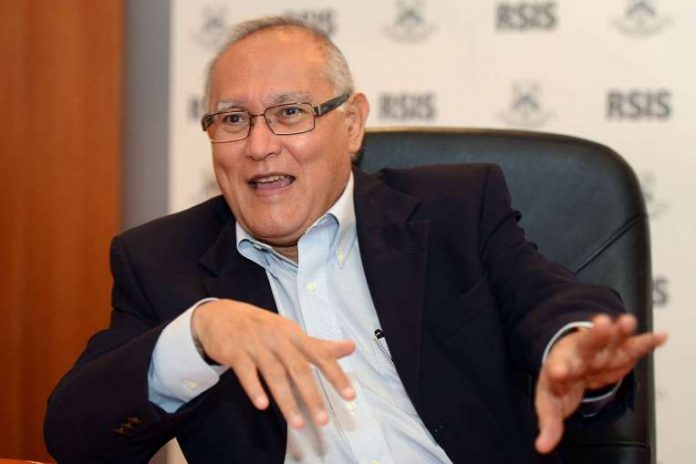 The Government of Singapore has appointed Ambassador Barry Desker as Singapore’s Representative to the ASEAN Intergovernmental Commission on Human Rights (AICHR).  Ambassador Desker’s term of service will begin on 1 January 2016.

The AICHR is an organ of ASEAN established in accordance with the ASEAN Charter as the overarching human rights institution in ASEAN with overall responsibility for the promotion and protection of human rights.  In line with its Terms of Reference, the AICHR developed an ASEAN Human Rights Declaration which was adopted by the ASEAN Leaders at the 21st ASEAN Summit in Phnom Penh in November 2012.

Mr Desker is currently the Non-Resident Ambassador of Singapore to the Holy See and Spain.  He is also a Member of the Presidential Council for Minority Rights and a Member of the Board of Directors of the Lee Kuan Yew Exchange Fellowship.

Mr Desker is a Distinguished Fellow and holds the inaugural Bakrie Professorship of Southeast Asia Policy at the S. Rajaratnam School of International Studies (RSIS), Nanyang Technological University.  He is also a Member of the Governing Board of the Economic Research Institute for ASEAN and East Asia,  the Board of Directors of the Cordell Hull Institute (Washington DC), Member of the Trilateral Commission and an Honorary Advisor of the UN Association of Singapore.

Mr Desker joined the Singapore Foreign Service in 1970.  He was appointed as Deputy Secretary in the Administrative Service in 1982. From 1984 to 1986, he was the Director of the Policy, Planning and Analysis Division at MFA.  He served as Singapore’s Deputy Permanent Representative to the United Nations in New York from 1982 to 1984 and was the Ambassador to Indonesia from 1986 to 1993.  He was the Chief Executive Officer of the Trade Development Board from 1994 to 2000.  Mr Desker was the Dean of RSIS from 2007 to 2014, and the Director of the Institute of Defence and Strategic Studies from 2000 to 2014.

Mr Desker was awarded the Public Administration Medal (Gold) in 1992 and Long Service Award in 1995.

Mr Desker is married to Peggy Ann Rozario and they have two children.

Dr Jayakumar was educated at Oxford University where he studied History.  He has been a member of the Singapore Administrative Service since 2002.  During this time, he was posted to various Ministries, including the Ministries of Defence, Manpower, Information and the Arts, and Community Development, Youth and Sports.  Dr Jayakumar was a Senior Visiting Research Fellow at the Lee Kuan Yew School of Public Policy from 2011 to 2014.  The main focus of his research and writing there was local society and politics.  His other research interests include extremism, social resilience, and homeland defence.