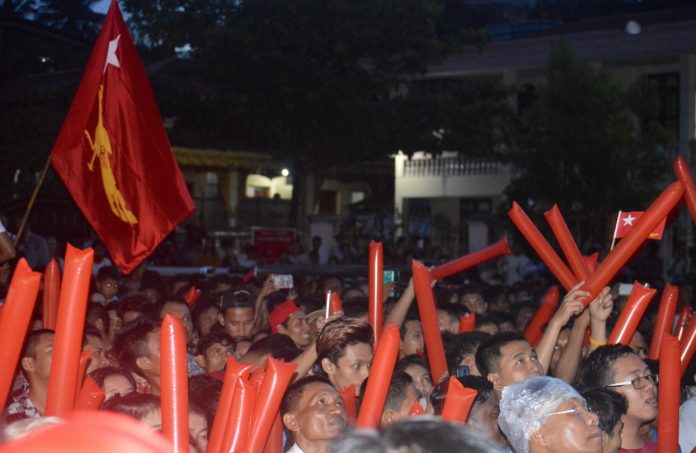 As parliamentarians from across Southeast Asia, we congratulate the people of Myanmar on their participation in a peaceful and historic vote, and we look forward to welcoming our newly elected colleagues from Myanmar as partners in the realization of a truly people-centered ASEAN Community.

As parliamentarians from across Southeast Asia, we congratulate the people of Myanmar on their participation in a peaceful and historic vote, and we look forward to welcoming our newly elected colleagues from Myanmar as partners in the realization of a truly people-centered ASEAN Community.

Despite fundamental flaws that undermined the integrity of the electoral process, we were heartened to see so many of Myanmar’s people cast ballots on 8 November. The opportunity to participate in a competitive election is a uniquely special experience. The fact that voters turned out enthusiastically in such large numbers is a testament to the yearning for democracy that has existed in Myanmar for decades.

We welcome the fact that the election proceeded without major incidents of violence or widespread fraud. However, the lack of inclusivity, as a result of significant disenfranchisement of minority populations, prevented the vote from being truly free and fair. Likewise, the Myanmar military’s continued dominance over the political system, including privileges enshrined in the deeply flawed 2008 constitution, presents a substantial barrier to the fulfillment of the democratic aspirations of the people of Myanmar.

There is much work to be done. Repressive laws that restrict fundamental freedoms remain on the books. Impunity for rights violations by security forces persists, particularly in ethnic areas. Too many women continue to face the scourge of sexual violence. The decades-old problem of land confiscation continues to deprive citizens of property and livelihoods, and remedy for past injustices remains out of reach for too many. Systematic discrimination against Rohingya Muslims threatens their very existence in the country. We urge newly elected parliamentarians and the new government that will be formed in the coming months to act swiftly to address these serious human rights concerns and take steps to move closer to an inclusive, accountable democratic system.

We remain concerned about the politics of exclusion and hatred, which impacted the campaign and deprived many individuals of their rights to participate in the electoral process, both as voters and candidates. While we were relieved that the vote passed peacefully, we call on the people of Myanmar and their newly elected leaders to reject the forces of extremism and embrace political inclusion and respect for diversity.

We stand ready to assist our fellow lawmakers in Myanmar in surmounting these challenges. We hope that the coming months proceed as peacefully as the past week has, and we look forward to working with the new government on supporting the advancement of human rights and true democracy.

Congratulations to the people of Myanmar on this historic accomplishment. Now the real work begins.