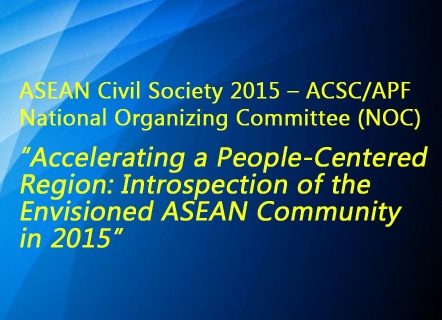 As Malaysia will be the next chair of the Association of Southeast Asian Nations (ASEAN) in 2015, the Malaysian government will be the host of two ASEAN Summits in 2015. To build on the achievements of civil society organizations in the region in asserting the rights of the peoples in the past 9 years via the ASEAN Civil Society Conference/ASEAN People’s Forum (ACSC/APF) processes and to continue to campaign for a regional development in Southeast Asia that adheres to human rights, democracy, just, peaceful and sustainable, civil society organizations in Malaysia have decided to host the next ACSC/APF in parallel to the ASEAN Summit in Malaysia in March/April 2015.

Following this development, a National Organizing Committee (NOC) of ACSC/APF 2015 was formed by Malaysian civil society organizations and officially announced in a press conference in Kuala Lumpur on 6 August 2014. The NOC is co-chaired by Mr. Jerald Joseph from Pusat KOMAS and Mr. Yap Swee Seng from Suara Rakyat Malaysia (SUARAM). The NOC has since started the initial discussion on the preparation work for the ACSC/APF 2015 within civil society organizations in Malaysia as well as with the Solidarity for Asian Peoples’ Advocacy (SAPA) Working Group on ASEAN on 13 August 2014 in Bangkok.

The NOC has decided to call for a wider consultation and participation in organizing the ACSC/APF 2015 and thus will be organizing the first regional consultation meeting on the ACSC/APF 2015 on 24-25 September 2014 in Kuala Lumpur, Malaysia. The participating organizations must adhere to the guiding principles that have been outlined by the NOC in the flyer on ACSC/APF as attached.

The regional consultation meeting is also open to regional organizations and the deadline for submission of representatives is also 21 September 2014.

The first regional consultation meeting will have the discussion on the overall direction and objectives of the ACSC/APF 2015, the theme, the modalities, programs, budget as well as the formation of the regional organizing committee.

As in the past, those who wish to participate in the first regional consultation meeting shall be self-funded. The NOC will only be responsible for providing the venue and the meals during the two-day meeting (lunch and two tea breaks).

Please find attached the press release of the NOC announcing the hosting of the ACSC/APF 2015 as well as the flyer on ACSC/APF 2015 circulated to media and civil society in Malaysia as attached.

We look forward to seeing you in Kuala Lumpur in September 2014.

Document related to the Invitation: