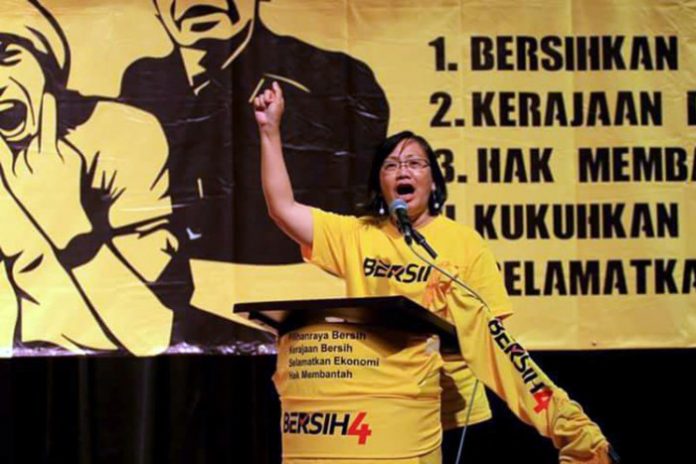 Death threats are the latest form of harassment levelled against the Chairperson of the Coalition for Clean and Fair Elections (Bersih 2.0) and other organizers, activists and supporters of the Bersih 5 rally, planned for 19 November, calling for electoral reform

On 18 October, the Chairperson of the Coalition for Clean and Fair Elections (Bersih 2.0) Maria Chin Abdullah and her immediate family members; Bersih 2.0 Secretariat Manager, Mandeep Singh; and former chairperson, Ambiga Sreenevasan, received death threats via disturbing images in a WhatsApp message. Maria Chin Abdullah has previously faced threats for organizing the Bersih 5 rally. Following the rally’s announcement, she was reportedly subjected to a serious threat on her life which is now the subject of a police investigation.

Bersih 2.0 are organizing the Bersih 5 rally, planned for 19 November, calling for electoral reform. A Bersih convoy has been held around the country every weekend since 1 October and is planned to continue until the demonstration on 19 November. There have been a number of attacks by ‘anti-Bersih’ groups against the convoy as well as against three journalists covering the convoy. Those involved have lodged police reports for criminal intimidation and battery. There has been a pattern of arrests and excessive use of force by police against activists involved in the series of Bersih rallies held since 2007 as well as intimidation and threats by non-state actors. Perpetrators have rarely been held to account.

In December 2015, the Malaysian government voted in favour of a United Nations General Assembly resolution on the protection of human rights defenders which calls for accountability for attacks against human rights defenders and their families. The Malaysian authorities must ensure the safety and security of all those involved in any form of peaceful protest and their families and that threats are thoroughly investigated and where appropriate perpetrators are brought to justice.

ADDITIONAL INFORMATION
The first Bersih rally was held in 2007 (known as Bersih) and at the time Amnesty International, along with a number of other human rights organizations, raised concerns about violence and harassment against its leaders and supporters.
Over 900 people were arrested at a second Bersih rally (Bersih 2.0) held in 2011, including the Chair of the coalition at the time, Ambiga Sreenavasan, with mass arrests and the use of excessive force by the police (see:
https://www.amnesty.org/en/documents/ASA28/002/2011/en/).

At the third Bersih rally in 2012 (Bersih 3.0) Amnesty International reported a number of incidents of brutality by the police against peaceful protestors and journalists covering the event and called for investigations to be carried out (see: https://www.amnesty.org/en/documents/ASA28/001/2012/en/). In April 2013, the national human rights commission of Malaysia) SUHAKAM commenced a public inquiry into the incidents during and after the demonstration. Amongst its findings, SUHAKAM found that the participants of the assembly were not given sufficient and reasonable time to disperse in an orderly and safe manner before water cannon and tear gas were deployed against them. The inquiry also found that there were attempts by the police to prevent the media from covering the event by confiscating their equipment, deleting their photographs as well as arresting or assaulting them.

In November 2012 two police officers, Corporal Mohd Khairul Asri and Constable Shahrul Niza Abdul Jalil, charged with assaulting a Guang Ming Daily photographer during Bersih 3.0 were acquitted by the Kuala Lumpur Magistrates Court. The court ruled in favour of the police after the photographer and other witnesses testified they could not identify the attackers.

Please write immediately in English, Malay or your own language, calling on the Malaysian authorities to: