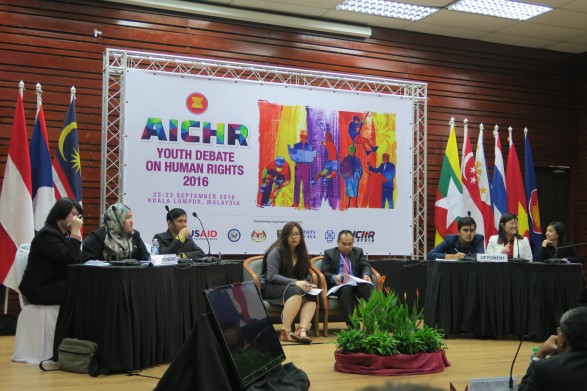 AICHR held the third edition of its Youth Debate on Human Rights themed “Realising the 2030 Agenda for Sustainable Development in the Context of the ASEAN Human Rights Declaration 2012” in Kuala Lumpur, Malaysia.

On 22 and 23 September 2016, the ASEAN Intergovernmental Commission on Human Rights (AICHR) held the third edition of its Youth Debate on Human Rights themed “Realising the 2030 Agenda for Sustainable Development in the Context of the ASEAN Human Rights Declaration 2012” in Kuala Lumpur, Malaysia. The event was organised by the Ministry of Foreign Affairs of Malaysia in collaboration with the University of Malaya, the Malaysian Institute for Debate and Public Speaking (MIDP) and the ASEAN-U.S. Partnership for Good Governance, Equitable and Sustainable Development and Security (ASEAN-U.S. PROGRESS).

In his welcome remarks, His Excellency Edmund Bon Tai Soon said that while the Sustainable Development Goals (SDGs) appear to focus on the achievements of communities and countries, they really arise from the concern for the rights, dignity and well-being of each human individual which in turn are clearly spelled out in the ASEAN Human Rights Declaration (AHRD). The AICHR, being the overarching ASEAN human rights institution, must view the SDGs through the human rights lens and ensure that human rights principles are integrated in the ASEAN process of achieving the SDGs.

As the AHRD is a historic agreement between the 10 ASEAN Member States to respect, protect and fulfil minimum standards of human rights in the region, His Excellency urged for the promotion and use of the AHRD to the fullest extent possible in advocacy efforts. In this regard, he issued a “General Observation No. 1/2016: Interpretation of Articles 6, 7 and 8 of the ASEAN Human Rights Declaration 2012” to elaborate on three provisions of the AHRD. These provisions pertain to (i) duties and responsibilities, (ii) application of human rights in regional and national contexts, and (iii) legal limitations of human rights.

The Debate increased public awareness of the AHRD, and provided a platform for ASEAN youth to express their views on contentious human rights issues such as abortion, child marriages, climate change, the rights of migrant workers and the right to peace. The judges chose the best debater from each of the five sessions as follows: Mr Chun Heng Sae Seah (Thailand), Mr Kishen Sivabalan (Malaysia), Ms Jutima Wanitchakarnchai (Thailand), Mr Alfonso Roel Vargas (the Philippines) and Ms Dan Thao Nguyen Do (Vietnam).

The fourth edition of the Debate to be held in 2017 will be hosted by AICHR Thailand.