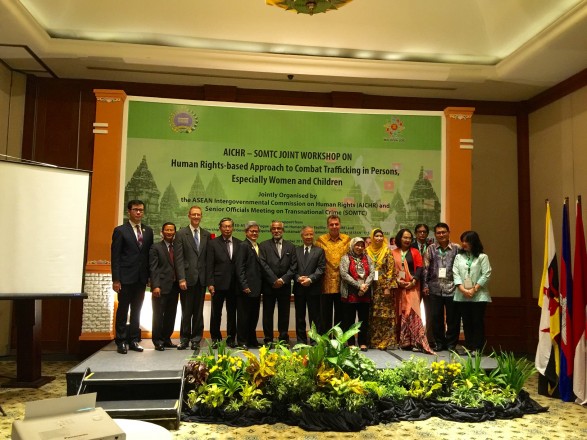 As ASEAN draws closer to the adoption of the ASEAN Convention on Trafficking in Persons, Especially Women and Children (ACTIP) and the ASEAN Plan of Action (APA), the ASEAN Intergovernmental Commission on Human Rights (AICHR) and Senior Officials Meeting on Transnational Crime (SOMTC) organised its first ever joint workshop on “Human Rights-based Approach to Combat Trafficking in Persons, Especially Women and Children”. Among its objectives is an exchange of ideas between the AICHR, SOMTC, and other relevant ASEAN bodies/sectoral bodies on how human rights and gender perspective should be applied under the ACTIP and its APA.

The Representative of Indonesia to the AICHR, Mr. Rafendi Djamin, underlined that no ASEAN Member State (AMS) is free from the issue of trafficking of women and children, and that it takes place in any form – whether during or after disasters, in the movement of migrant labour, irregular migration caused by war, internal armed conflict, as well as extreme poverty. He emphasised that all forms of trafficking – including force labour, sex labour, or child force labour – are against human dignity and should not exist in modern era. He further stated that trafficking does not come in vacuum, but could be the excess of poverty, irregular migration, war and natural disaster. Finally, he identified that the crosscutting nature of trafficking of women and children could be a start for better cooperation and/or coordination amongst relevant organs/bodies/sectoral bodies of ASEAN.

The Chair of SOMTC, H.E. Sieng Lapresse, preceded discussions with his Keynote Remarks – where he called upon participants to look into the affirmations contained in the ASEAN Human Rights Declaration (AHRD) and the Phnom Penh Statement on the Adoption of the AHRD such as “to live in dignity”, freedom from “arbitrary interference with his or her privacy including personal data”, and “the right to free choice of employment”. He addressed that ASEAN should concentrate on the identification of the root cause on trafficking in persons. He viewed the Joint Workshop as the relevant forum and best opportunity for all stakeholders to initiate the development of the right legal structure and policies – building upon existing international law; the UN Convention against Transnational Organised Crime and the Protocol to Prevent, Suppress and Punish Trafficking in Persons; Protocol against Smuggling of Migrants by Land, Sea and Air; as well as the ASEAN Convention and ASEAN Plan of Action against Trafficking in Persons, Especially Women and Children.

Discussions during plenary sessions touched upon human rights perspective on regional initiatives, priorities, as well as policies in combating trafficking in persons (TIPs); application of rights-based approaches towards the implementation on prevention of and protection from TIPs; and highlighted the issue of vulnerability of the people affected by disaster that could become victims of TIPs. Following joint presentation by the ASEAN Committee on Disaster Management (ACDM), ASEAN Coordinating Centre for Humanitarian Assistance on disaster management (AHA Centre), and Disaster Management and Humanitarian Assistance (DMHA) Division of the ASEAN Secretariat, discussions on TIPs for the first time looked into how it could be prevented and punished in situations of natural, as well as man-made disasters.

Following the Joint Workshop, a special closed discussion session between the AICHR, SOMTC, and relevant ASEAN organs/bodies/sectoral bodies was held – aimed to synthesize their efforts in the prevention, protection, and cooperation in addressing the issue of TIPs. The session finally generated recommendations on possible ways forward to further cooperation. Amongst the possible ways forward, whether already put forward in a work plan of each ASEAN bodies, or in form of a developing idea, include – discussions to raise awareness and understanding on ACTIP and APA after its adoption; an annual meeting between the AICHR, SOMTC, ASEAN Commission on the Promotion and Protection of the Rights of Women and Children (ACWC), Senior Officials Meeting on Social Welfare and Development (SOMTC) and other ASEAN sectoral bodies related to the issue of TIPs; inviting each other in any activities related to TIPs and human rights; information sharing on programmes of activities on TIPs; identifying areas of cooperation on mutual interest as part of the implementation of ACTIP and APA (e.g. victims of TIPs identification); and the socialisation on the ACWC’s ‘Guidelines on Protection of Women in Trafficked Situations’ through consultation with other ASEAN bodies/sectoral bodies – following its expected adoption in the upcoming 27th ASEAN Summit.