Home Statements ASEAN should get people back as its focus - Jakarta 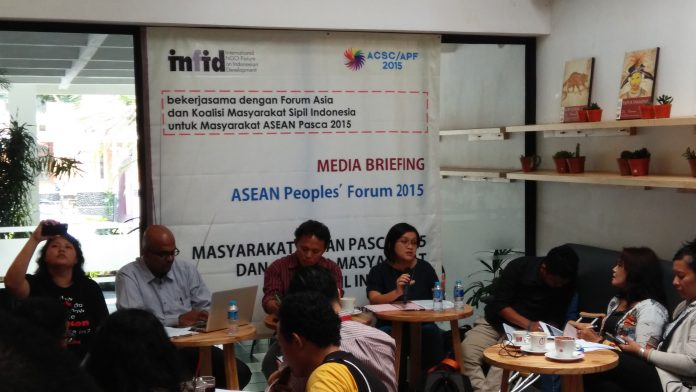 As ASEAN is heading for the creation of a single community later this year, the grouping needs to get people back at the center of its activities, a prime focus that will bring benefit to people in the region, activists say.

As ASEAN is heading for the creation of a single community later this year, the grouping needs to get people back at the center of its activities, a prime focus that will bring benefit to people in the region, activists say.

The ASEAN People’s Forum (APF) underscored during a press briefing in Jakarta on Wednesday, ahead of its meeting in Kuala Lumpur on April 21-24, that there was still a big gap between “where we are and need to be”.

“Government is too symbolic, and we think it’s time, at the 10-year cycle, to get the people back at the center,” said Jerald Joseph, chairman of the APF.

He was referring to the importance of what has been declared by Malaysia Prime Minister Najib Razak that ASEAN must be a people-centered ASEAN. Malaysia is chair of ASEAN for 2015.

The APF noted the failures of ASEAN governments — which “appear to be in a competition to outdo one another in human rights violations and regressive politics” — and declared four regional priorities: developmental justice, democratic process, peace and security, discrimination and inequality.

“ASEAN already has a vision: people-centered, people-oriented ASIAN. So where are the people actually? We have to put a lot of human rights agenda in the new post-2015 blueprint,” Daniel said.

Fair representation was a concern, he added. “[ASEAN] is comprised of elite groups, and intergovernmental. Compare it with the EU, where there is a parliament; where people are represented already; where there are courts, human rights courts.”

“We from our civil society want to approach the government, so that our agenda becomes their agenda,” Daniel said.

“Their agenda” urges numerous “overarching recommendations”. Among other things, these target sexism and racism that has occurred under the auspices of “neoliberalism”, which enshrines private interests at the expense of human rights, he added.

Atnike Nova Sigiro, APF steering committee manager, highlighted some human rights aspects. “It’s been six years since the human rights body of ASEAN was established in 2009; yet it cannot make any response to any actual human rights violation in the region.”

With the ASEAN Community being fully implemented at year-end, there is pressure to ratify its legitimacy as an institution.

A history of violence undermines this end, and Atnike suggested ASEAN governance needed to set a new standard.

“Even ASEAN non-interference principles should have their limits, when it comes to a serious human rights violation, like what happened in Burma with the Rohingya.”