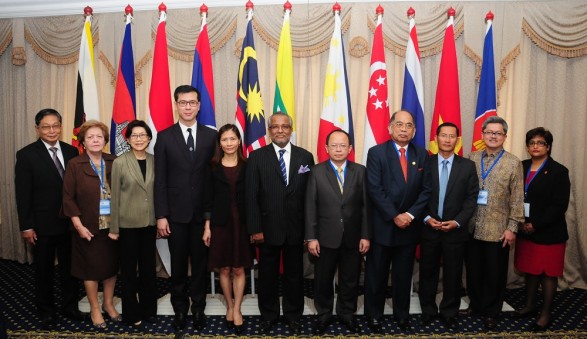 AICHR convened its 17th Meeting, in Kuala Lumpur on 11 to 14 February 2015. The meeting was chaired by H.E Tan Sri Dr Muhammad Shafee Abdullah, the Chairperson and the Representative of Malaysia to the AICHR. The Meeting was the first regular meeting under the Chairmanship of Malaysia.

The ASEAN Intergovernmental Commission on Human Rights (AICHR) convened its 17th Meeting, in Kuala Lumpur on 11 to 14 February 2015. The meeting was chaired by H.E Tan Sri Dr Muhammad Shafee Abdullah, the Chairperson and the Representative of Malaysia to the AICHR. The Meeting was the first regular meeting under the Chairmanship of Malaysia. The Chair outlined Malaysia’s priorities for the year 2015 embodied in human rights initiatives related to the judiciary, youth, and media.

The current year looks to be an industrious year for AICHR. Throughout the four-day meeting, the AICHR adopted a number of activities in the implementation of the Work Plan 2010 – 2015 as well as additional projects initiated by AICHR Representatives. The adopted activities include workshops, dialogues and consultations on prospective regional human rights instruments, protection of women and girls from violence, human rights training of journalists and the human rights dialogue with the ASEAN Community Councils and an ASEAN Youth Debate. The AICHR also began the groundwork for drafting the new Five Years AICHR Work Plan for the period of 2016 – 2020.

The two adopted guidelines are significant developments towards further institutionalizing the interaction of the AICHR with other stakeholders. In line with improving the promotion of the AICHR and its activities at the domestic level in all ASEAN Member States, the Meeting also launched the AICHR national websites of Myanmar, Thailand, and Malaysia.

Finally, the Meeting also received a delegation from USAID Asia as a continuation of deepening dialogues on future cooperation on the ASEAN – US PROGRESS project.

The Meeting thanked the Representative of Malaysia and the Government of Malaysia for their hospitality and excellent arrangements for the meeting. The AICHR will hold another Special Meeting in 21 – 24 March 2015.