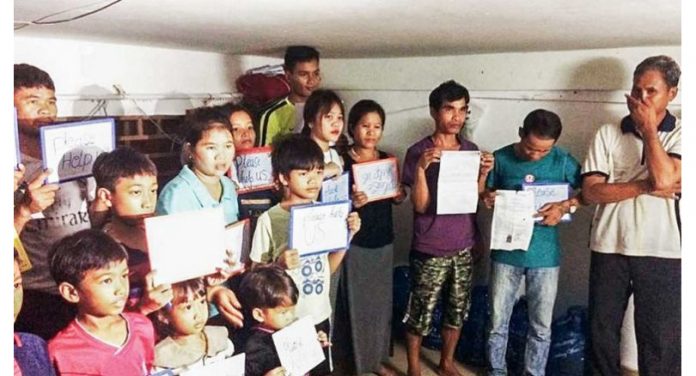 Staying positive: The journalists from Eleven Media Group waving as they exit a police truck for their trial in Yangon. — AP

YANGON: Three detained journalists appeared in a Myanmar court to face charges filed against them by the Yangon city government, which alleges a story they published was false.

An increasing number of journalists have been arrested and jailed for their work under Myanmar’s civilian government, led by Nobel Peace Prize laureate Aung San Suu Kyi, a former political prisoner.

A director in the Yangon city government filed a complaint saying the journalists – editor in chief Kyaw Zaw Lin, managing editor Nari Min and chief reporter Phyo Wai Win – violated a law banning publication of “incorrect information” that could cause “fear or alarm to the public.” Punishment under the law can include two years’ imprisonment and a fine.

Human Rights Watch called for the charges to be withdrawn.

“By arresting these three journalists for simply doing their job to investigate and report on possible Yangon municipal malfeasance, the Myanmar government shows how little it respects freedom of the press,” said Phil Robertson, the human rights group’s deputy Asia director.

“Democracy is in deep trouble in Myanmar if officials can get reporters tossed in prison any time they ask a tough question. The government should order the prosecutor to withdraw the charges, and cease its harassment of the media.”

Journalists from Eleven Media have been arrested in the past for investigating corruption by high-ranking politicians.

In 2016, its chief executive and chief editor were detained after publishing an opinion piece on corrupt officials. Those charges were eventually dropped.

Recent jailings of journalists in Myanmar include Reuters reporters Wa Lone and Kyaw Soe Oo, who were sentenced to seven years in prison earlier this year. They had been reporting on the military’s operations against minority Rohing­ya Muslims and were accused of possessing secret documents.

“The decline of press freedom in Myanmar is alarming,” said Matthew Smith, the head of human rights group Fortify Rights. “With each imprisoned journalist, the authorities dig the country deeper into an authoritarian pit.” — AP