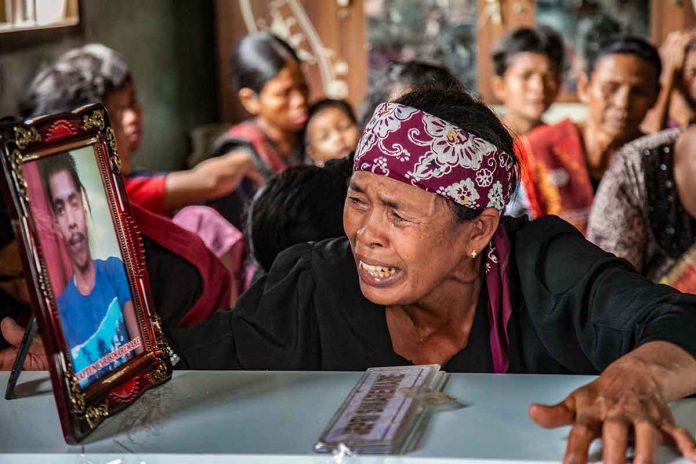 Santi Sirait, whose son was killed in a massacre by suspected separatist rebels, grieves following the arrival of his coffin in Sei Belutu village in Serdang Bedagai, North Sumatra province on 8 December, 2018. (Ivan Damanik / AFP Photo)

The recent massacre of civilian workers by separatist rebels in Indonesia’s restive Papua province has cast a spotlight on one of the world’s longest-running insurgencies, with no end to the bloody conflict in sight.

The killings are a marked escalation from decades of mostly sporadic skirmishes between poorly armed and disorganised guerrillas and a powerful Indonesian military accused of gross human rights abuses against civilians.

Some 16 employees of a state-owned contractor were murdered at a remote jungle work camp on Sunday with at least three more workers still missing.

They were building bridges and roads in a major infrastructure push for Indonesia’s most impoverished region, but rebels claimed they were legitimate targets, raising concerns that the independence struggle has taken a dangerous new turn.

“There has never been an attack of this type of scale by separatist guerrillas,” said Damien Kingsbury, professor of international politics at Australia’s Deakin University.

“The outbreaks of mass violence to date have been perpetrated by the Indonesian military.”

The conflict in mineral-rich Papua traces its roots to Dutch de-colonisation in the early 1960s, with more recent grievances fanned by marginalisation of the ethnic Melanesian population and widespread rights abuses, including extrajudicial killings.

Papua, which shares a border with island nation Papua New Guinea, just north of Australia, remained a Dutch colony for more than a decade after the Netherlands relinquished its former East Indies territories to a newly independent Indonesia in 1949.

Despite laying the groundwork for Papuan self-government, the Netherlands came under pressure from a White House fearful about communism spreading across Southeast Asia.

So, it agreed in 1962 to place Papua under temporary United Nations (UN) administration before it was ceded to Indonesia a year later, on the condition it hold an independence referendum.

The vote – called the Act of Free Choice – is widely viewed as a sham. About 1,000 handpicked Papuans unanimously chose to remain part of Indonesia, allegedly under the threat of violence.

Jakarta cites the referendum as proof its control is legitimate.

But for some Papuans, who are ethnically different and share almost no cultural ties with the rest of the sprawling archipelago, it was the start of another colonial occupation that has seen them dispossessed of land where their ancestors lived for centuries.

Much of the insurgency has centred around a huge gold and copper mine operated by US-based firm Freeport McMoRan, seen locally as a symbol of environmental devastation and exploitation of Papua’s enormous mineral wealth.

Since his 2014 election, President Joko Widodo has overseen an unprecedented development push, including the ambitious 4,300-kilometre (2,700-mile) Trans-Papua highway.

But analysts say it may be too little, too late.

“If Papua is part of Indonesia, it should’ve been built up in the same way as other regions,” said Adriana Elisabeth, a Papua expert at the Indonesian Institute of Sciences.

The depth of discontent was underscored last year when 1.8 million Papuans signed an ultimately unsuccessful petition asking the UN to recognise a self-determination vote.

Most victims of the weekend massacre had their hands tied together with some suffering gunshot or knife wounds and blunt-force injuries, authorities said. One worker was almost decapitated.

The faction of the National Liberation Army of West Papua (TPNPB), which claimed responsibility, is one of the independence movement’s most militant groups and its actions could spark copycat attacks, along with a deadly military response, according to the Jakarta-based Institute for Policy Analysis of Conflict.

While the brazen attack may signal an emboldened rebel strategy, the actions taken by a local faction on its own highlight an armed struggle beset by clan rivalries, competing interests and with no formal command structure, analysts said.

Regardless, the killings may hurt an independence movement that has struggled to capture the attention of the international community, Deakin University’s Kingsbury said.

It does not receive significant funding or arms from abroad, the group and analysts say.

“Independence has not received much support because Indonesia is a significant international actor with many differing friends,” Kingsbury said.

The rag-tag armed movement poses little threat to a country of some 260 million people, but Jakarta has had little success stamping out the insurgency.

The rebels say they remain committed to fighting for independence, while Indonesia has shown no interest in coming to the bargaining table.

“If you tell the government it should hold talks about Papua’s independence, they don’t want to do that,” said Elisabeth of the Indonesian Institute of Sciences.

“They have invested too much in Papua.” – AFP