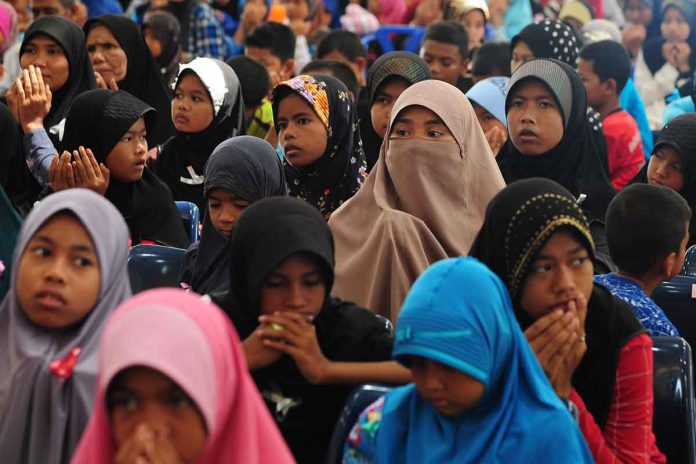 This photo taken on 13 August, 2018 shows Thai Muslim children and orphans gathered to receive cash donations from local government officials and Muslim leaders to mark the first day of the holy month of Hajj pilgrimage in the southern province of Narathiwat. (Madaree Tohlala / AFP Photo)

As of November, Thailand health officials have recorded 1,500 cases and 12 deaths due to the outbreak of measles in the Southern provinces of the country. According to local news reports, the majority of patients are babies and children who have not been vaccinated.

Thailand’s Department of Health Service Support (DHSS) said local public health offices and members of these agencies are expected to make sure all children in their respective provinces receive proper vaccines and educate the locals on a healthy lifestyle.

The fact that it is Southern Thailand – the Muslim majority portion of Thailand – which is facing such a large outbreak is no coincidence. However, it is tragic that it is the children are the ones who suffer the most.

Human Rights Watch’s Children Rights Division deputy director Bede Sheppard recently noted that the outbreak of the disease was because certain local Islamic teachers have been preaching that the vaccine is somehow un-Islamic. This, he said, has led to a drop in vaccination rates and a quick resurgence of the deadly disease.

The Chularatchamontri (Muslim spiritual leader of Thailand), Aziz Pitakkumphol has gone on record rejecting the notion that vaccinations are contrary to Islamic principles. The Central Islamic Council of Thailand has even said that if vaccines contained religiously prohibited items, the medical benefits to a person and the community would take precedence.

Unfortunately, this has not stopped the misinformed opposition against vaccinations among some of the Muslims in Thailand’s Deep South. Sheppard believes this could be linked to the insurgency and that the disinformation is being propagated by some of the separatist groups.

He cites the fact that separatist insurgents have burned down public health centres, murdered public health volunteers and hospital staff, and used a hospital for military purposes.

“They target the public health system as symbolic of what they consider to be the Thai Buddhist state’s occupation of their homeland. But it’s a tactic that kills children in their community,” he explained.

The incident Sheppard is referring to occurred in March 2016, when reports revealed that rebels in southern Thailand violated international law by taking over a hospital while attacking a military installation in the Narathiwat province. Thailand’s Ministry of Public Health reported that at least 112 public health volunteers and hospital staff have been killed or injured, and 28 community health centres burned down or bombed during the past 12 years in Thailand’s insurgency-wracked Deep South.

The high mortality rate in Thailand’s Deep South is especially unfortunate and meaningless considering the fact that Thailand imports measles vaccine products that do not contain porcine gelatine, as has been assured by health official Vicharn Pawan. 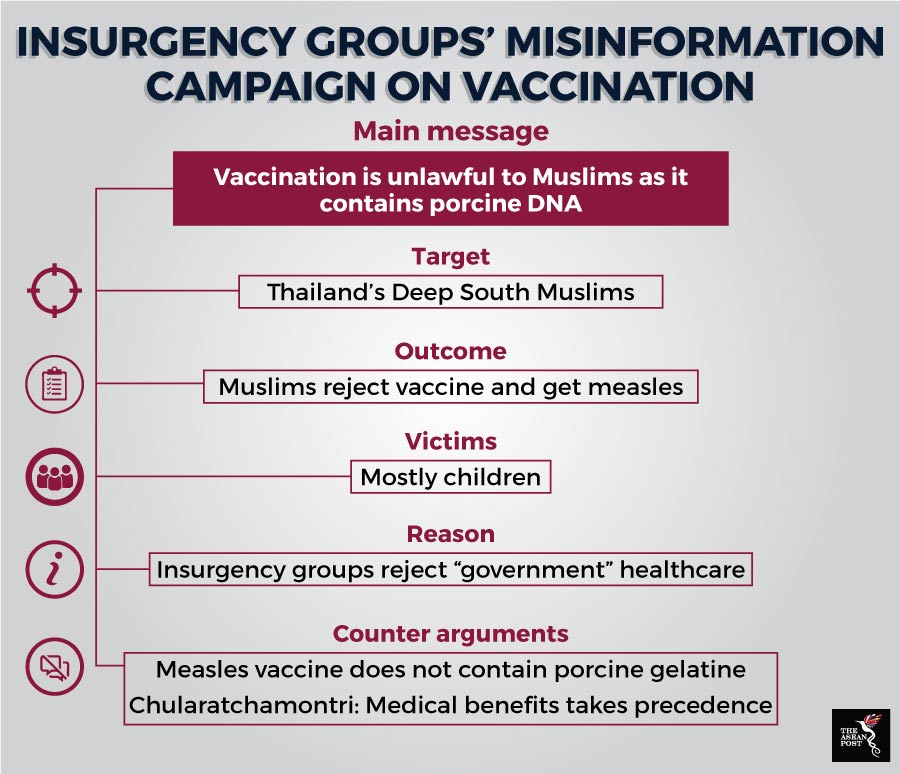 Thailand’s Deep South isn’t the only Muslim-majority area that is facing this problem. Reports in both, Malaysia and Indonesia tell a similar tale.

In August, a branch of the most influential Islamic body in Indonesia, the Indonesian Ulema Council (MUI), issued a religious decree against the use of the measles, mumps and rubella (MMR) vaccines because they contain porcine gelatine and are not halal (permissible by Islam).

The decree was released by the Riau Islands branch of the MUI. While it received support in some areas, it was ultimately overruled by a decision from the central Jakarta body and Ma’ruf Amin, the chair of the MUI and a candidate for the 2019 Indonesian presidential election.

Following Amin’s decision, the MMR vaccine is now considered “mubah” (permitted) nationwide by the MUI, which means that it is acceptable to use until a halal alternative is available.

Similarly, in Malaysia, in May 2016, Kelantan mufti (Muslim legal expert) Mohamad Shukri Mohamad and Perak mufti Harussani Zakaria were reported as saying that it was compulsory under Islam to use vaccines against diseases which can cause death. The statements followed the discovery that an outbreak of measles and rashes had increased following an anti-vaccine movement that rejected the vaccine for fear it contained pig DNA.

In Thailand’s case, the government must combat misinformation propagated by some separatist groups who only seek to further their cause. It would be wise for the Thai government to focus some attention on working alongside influential Islamic groups to spread awareness on Islam’s stand regarding vaccinations as it would be easier for Muslim Thais in the Deep South to trust the information if it were to come from the mouths of fellow Muslims.

While it is true that even the spiritual leader of Thailand has spoken up on this issue, there has to be continued stress on the importance of vaccination and Islam’s stand on the matter if it is to make a difference in the Deep South.