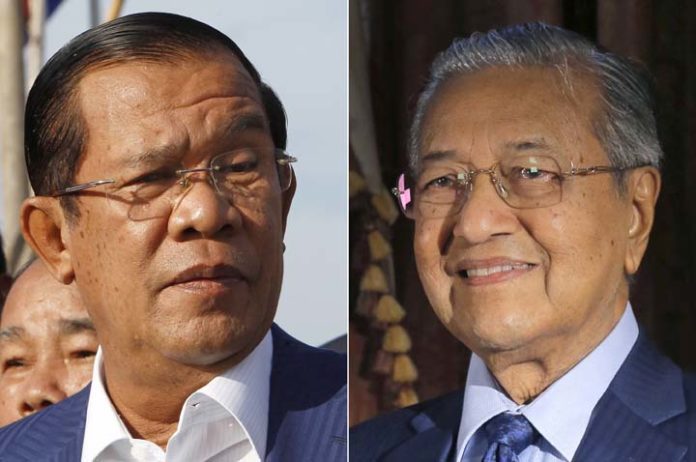 In Photo: In this combination of two photos showing Cambodian Prime Minister Hun Sen (left), in Phnom Penh, Cambodia, on August 1, and Malaysia’s Prime Minister Mahathir Mohamad in Putrajaya, Malaysia, on August 13, the two veteran Southeast Asian leaders appearing at the United Nations present a microcosm of a dynamic region enjoying rapid economic growth but struggling to fan away egregious human-rights problems that follow it like a bad smell. Mahathir has shed his authoritarian past, while Hun Sen comes to New York having won all the seats in an election after outlawing his main political opposition.

UNITED NATIONS—Two veteran Southeast Asian leaders appearing at the United Nations on Friday present a microcosm of a dynamic region enjoying rapid economic growth but struggling to fan away egregious human-rights problems that follow it like a bad smell.

On the one hand is Malaysia’s Mahathir Mohamad, who at the grand old age of 93 has shed his authoritarian past, ousted a rival accused of massive corruption through democratic change, and re-entered the international stage with vigor.

On the other is Cambodia’s Hun Sen, who has ruled his nation with a combination of political guile and brute force for three decades, and comes to New York having won all the seats in an election after outlawing his main political opposition.

It was ever thus with the 10-member Association of Southeast Asian Nations, an unwieldy mix of democracies and autocracies where politics struggles to keep pace with social change.

It’s a grouping that carefully balances its relations between the United States and China but typically has few answers to international criticism over gross rights violations in its midst as it abstains from interfering in the affairs of its member-states.

This year, Asean is shadowed by accusations of genocide perpetrated by the military in Myanmar against Rohingya Muslims. It’s a rare instance in which the Western world and majority-Islamic nations have been united in outrage.

That has spoiled what had been one of the region’s democratic transition success stories. Just two years ago, Myanmar’s Aung San Suu Kyi, a Nobel laureate and former political prisoner, received a hero’s welcome when, after a historic election victory, she became the first civilian leader of her nation in five decades to address the General Assembly. This year she is notably absent and has sent a government minister in her place.

But two other familiar Southeast Asian icons are here—and their respective journeys are a telling reflection of the competing forces in their region—the popular desire for more democratic accountability and the resistance of entrenched leaders to change in political structures that they have dominated for decades.

Mahathir is returning to the UN after a gap of 15 years. It’s the culmination of a comeback remarkable for more than just the Malaysian prime minister’s age.

Angered by a graft scandal at the state investment fund, Mahathir emerged from political retirement and joined the opposition he had persecuted during his first, 22-year stint as leader. In the process he toppled a former protégé and the party at whose helm Mahathir oversaw the rapid development of his young country in the 1980s and 1990s while concentrating power under his increasingly authoritarian rule.

Where once he was an archetype of “Asian values”— a paternalistic view of government that prioritized economic progress over individual rights— now he’s showcasing Malaysia as a mature democracy that upholds the primacy of the rule of law.

The still-sprightly Mahathir is promising to hand over the reins of power within two years to Anwar Ibrahim, who had challenged Mahathir’s rule two decades previously and was subsequently convicted and imprisoned for years on charges of sodomy that were widely regarded as politically motivated.

He’s been in power for half of his 66 years and extended his rule last month after his party’s walkover election win. The government-influenced courts had dissolved the only credible opposition party last year, and Hun Sen says he intends to stay in office for 10 more years.

On the eve of Hun Sen’s appearance before General Assembly, a UN special rapporteur told the world body’s Human Rights Council that the elections had consigned Cambodia’s democracy to history for the next five years. Hun Sen’s party won every single parliamentary seat prompting rapporteur Rhona Smith to conclude: “The country is therefore de facto a single party state.”

With the possible exception of the 1997 coup that Hun Sen launched against a co-premier that brought fighting to the streets of Phnom Penh, that marks a nadir in Cambodia’s politics since its democracy was established on the back of internationally-endorsed peace accords in 1991 and massive United Nations support.

Members of the outlawed opposition party are set to protest outside UN  Headquarters when Hun Sen speaks Friday.

While the setbacks to human rights and democracy in Cambodia and Myanmar have drawn stiff criticism from the West, and from activists inside Southeast Asia itself, the wider trend lines suggest that authoritarianism is on the upswing in the region.

Democracy has been eroded in the Philippines by the strongman tendencies of its popularly elected leader Rodrigo Duterte; Thailand has been under military rule since 2014, and elections next year are unlikely to end the army’s sway over politics. The opposition in Singapore has never had a sniff of power, and Vietnam and Lao PDR have been under one-party rule since 1975. Only in Malaysia and the region’s largest nation, Indonesia, does democracy appear entrenched or in the ascendant.

US engagement with Asean, which was pushed hard by the Obama administration, has slipped under President Donald Trump. That’s less a result of the region’s democratic backsliding than Washington’s withdrawal from Trans-Pacific Partnership free trade deal and diminished diplomatic bandwidth, as the under-staffed State Department focuses on pressing concerns like North Korea and Iran.

But both US and China still view Asean as strategically important. It lies at a crossroads of sea lanes crucial for global trade, and with its growing markets is a crucible of investment opportunities. Southeast Asia has generally prospered over the past five decades and it remains one of the fastest-growing regions of the world, with GDP rising on average by more than 5 percent.

That will likely continue. What remains uncertain is whether Southeast Asia’s politics keep pace with the trend toward openness and connectivity among its 600 million people, or whether it resists those changes.

That’s to say, will it follow the transformative example of Mahathir, or the defensive crouch of Hun Sen?