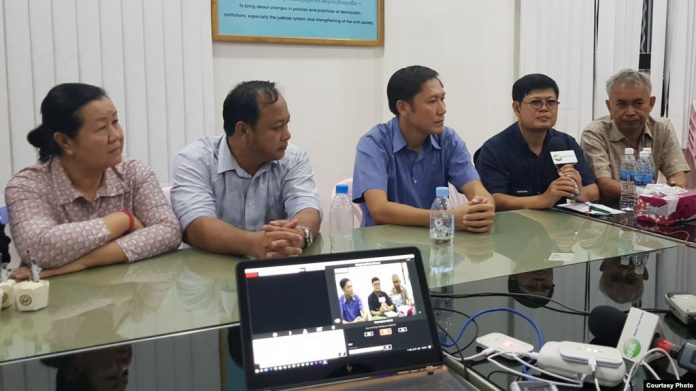 On Sunday, five international advocacy groups, including Human Rights Watch, called for the “politically motivated” case to be dropped for lack of evidence.
PHNOM PENH —

The Phnom Penh Municipal Court on Monday postponed a hearing in a case against four Cambodian human rights workers and a former election official charged with bribery offences.

Adhoc officials Ny Sokha, Yi Soksan, Nay Vanda, Lim Mony and Ny Chakrya, all staff members at local rights group Adhoc, and Ny Chakrya, also a former Adhoc staffer and member of the National Election Committee, were charged with bribery offences after it was alleged they coerced a witness in a case against the former opposition leader Kem Sokha.

The group was accused of paying Khom Chandaraty, a hairdresser who was alleged to have had an affair with Sokha.

Sam Sokong, a lawyer for Chakrya, and lawyers for the other four defendants requested the proceedings be delayed so more witnesses could be called, including Chandaraty. Sokha and Mony reportedly did not receive a notification to appear at the hearing.

Presiding Judge Duch Sarin, after deliberating for one hour, decided to allow the postponement.

On Sunday, five international advocacy groups, including Human Rights Watch, called for the “politically motivated” case to be dropped for lack of evidence.

Am Sam Ath, monitoring manager at Cambodian rights group Licadho, said it was unclear how the Cambodian judiciary thought the case could have proceeded in the absence of several key witnesses.

“If there is an absence of important witnesses, the trial is not comprehensive,” he said. “There will be no debate, just a verdict.”

The ADHOC 5 case has drawn widespread international condemnation. In April 2017, the group was also nominated as one of three finalists for the prestigious Martin Ennals Award, known as the “Nobel Prize for human rights defenders.”