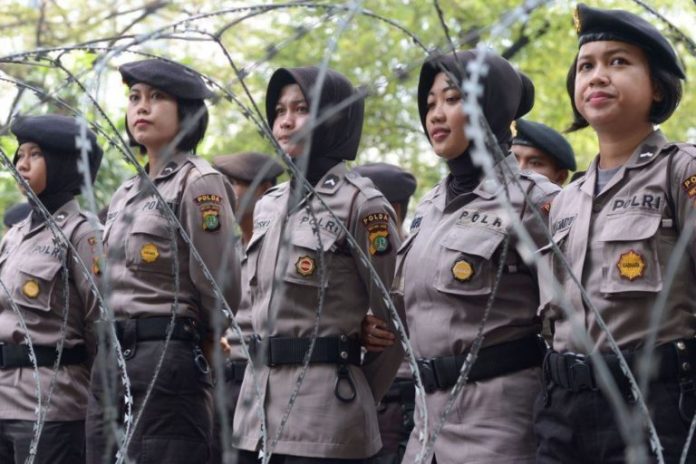 Indonesian policewomen stand in formation behind barbed wire as demonstrators participate in a May Day protest in Jakarta on May 1, 2017

(NEWSWEEK) – Women seeking to become police officers in Indonesia are compelled to undergo an invasive “virginity test” as a part of the recruitment process.

Despite international pressure to end the practice, prospective recruits are still subjected to the “two finger” test as part of the police’s “morality or physical examination,” Australian network ABC News reported.

The World Health Organisation said in 2014 that the tests have no scientific validity, and international human rights pressure group Human Rights Watch has urged Indonesia’s president, Joko Widodo, to ban the practice.

In a complaint to Human Rights Watch obtained by ABC, an Indonesian woman, identified only as Zakia to protect her identity, said that she failed the test, used to determine if the hymen is intact, after applying to become a police officer this year.

“They didn’t just insert their fingers into my vagina, but also into my anus. They kept probing … it was extremely painful,” she said.

“Every time I remember what happened, I cry … I feel like I don’t want to live anymore.”

A martial arts practioner, she said that she believed she may have broken her hymen during exercise. She said the test she was subjected to was not conducted by a medical doctor.

Sharyn Graham Davies from the Auckland University of Technology in a report published earlier in the year claimed that female recruits are also screened for their physical atractiveness by panels of male officers.

She writes that female officers are used in public relations campaigns to reform the image of the “corrupt policeman.”

It is not just in the police, but in the military that women are subjected to the examinations.

A prospective recruit identified as Rianti told the South China Morning Post in August that she was subjected to the “virginity test” by a male medic after applying for a military posting in Jayapura.

“I just wanted it to be over as quickly as possible. It felt like the longest few minutes of my life. I had never been touched by a man before, it was humiliating. I was shocked,” she told the publication.

In a 2017 report on the practise, Human Rights Watch described “virginity tests” as a “form of gender-based violence” and a “widely discredited practice.”

It claims the tests have been used on female recruits in each branch of the Indonesian military for several decades, and even extended to the fiancees of male officers.

“The Indonesian government’s continuing tolerance for abusive ‘virginity tests’ by the security forces reflects an appalling lack of political will to protect the rights of Indonesian women,” said Nisha Varia, women’s rights advocacy director. “These tests are degrading and discriminatory, and they harm women’s equal access to important job opportunities.”