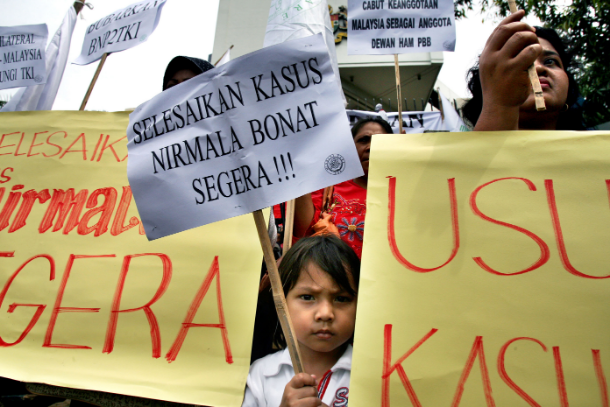 Indonesian demonstrators hold up placards during a protest in Jakarta against maid working conditions in Malaysia in this file photo. (Photo by Jewel Samad/AFP)

Ongoing discussions are also dealing with matters such as legal education for police and anti-human trafficking activists.

The eastern region was chosen for the pilot project because it has a high prevalence of people trafficking.

Between January and July this year, there were 25 reported cases of such trafficking, with 37 victims dealt with by police.

Dinna Wisnu, Indonesia’s representative to the AICHR, told ucanews.com that many areas in Indonesia face the scourge of human trafficking.

The pilot project in East Nusa Tenggara, which includes West Timor and is the southern-most province of Indonesia, would facilitate a better understanding of issues involved in order for it to become a national role model.

“The commission will involve ASEAN countries to untangle the grip of human trafficking,” she said.

Wisnu said that despite measures such as a one-stop service for handling overseas work permit applications, and help from religious leaders, abuses including torture and deaths had continued.

Wisnu, a lecturer at the Jakarta-based Atma Jaya Catholic University, said she intended to collaborate intensively with Malaysia and other ASEAN countries.

She noted that regional nations had signed the ASEAN Convention Against Trafficking in Persons (ACTIP) that was officially implemented in March, 2017, under the supervision of AICHR.

To train local law enforcers in advocacy, the commission will cooperate with the International Organization for Migration (IOM) and the Swiss Embassy in Jakarta as well as Indonesia’s parliament and foreign ministry.

In the past nine months, Padma handled the cases of 86 migrant workers from East Nusa Tenggara who died of torture or other forms of violence in Malaysia, mostly human trafficking victims.

Since unemployment in the province was very high, people inevitably looked for jobs abroad.

AICHR would assist by providing basic skills before people sought to become migrant workers, such as how to cook and language training, Sola said.

She said an aim was that involvement of the AICHR would strengthen networking for assisting victims and combating people traffickers.

“I hope that its presence will reduce the trafficking in persons at regional, national and international levels,” the nun said.