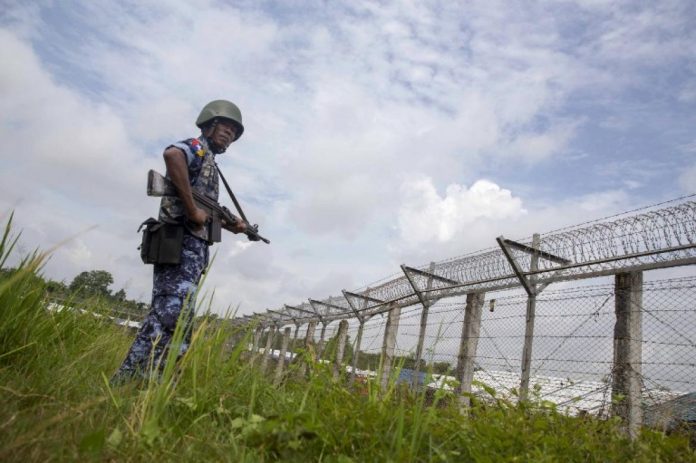 Myanmar border guard police patrol the fence in the “no man’s land” zone between the Myanmar and Bangladesh borders as seen from Maungdaw, Rakhine State. (AFP)

YANGON — The Association of Southeast Asian Nations wants the repatriation of refugees to Myanmar to be the next “key milestone” towards resolving the Rohingya crisis, Singapore Foreign Minister Mr Vivian Balakrishnan said yesterday, media reported.

The minister was speaking in parliament, where he had been asked about the latest responses to the crisis from ASEAN, chaired this year by Singapore.

Balakrishnan reiterated comments he made on September 29 at an informal meeting of ASEAN foreign ministers on the sidelines of the United Nations General Assembly in New York.

“Specifically, what we said last week to Myanmar was that we expect the voluntary repatriation to begin soon and ASEAN stands ready to help facilitate that in any way possible,” he told parliament.

He said ASEAN ministers had expressed grave concern to Myanmar at the meeting over the alleged acts of violence detailed by the UN Human Rights Council’s fact-finding mission in its report on the Rohingya crisis released on September 18.

The ministers had also urged the Myanmar government to give the independent commission of inquiry it appointed in July a full mandate to investigate and to hold those responsible fully accountable.

“To be brutally honest, this is a man-made humanitarian disaster and something which should not be happening in this day and age,” Balakrishnan told parliament.

“I want to emphasise that ultimately the responsibility for resolving this must lie with the government of Myanmar, and… we will hold them to account,” he said.

Balakrishnan called on the Myanmar government to implement more of the recommendations made by the UN Advisory Commission on Rakhine State, saying they would address the root causes of the crisis.

“We need circumstances in which there are opportunities for reconciliation, for assurances of justice and equality and, ultimately, for better prospects for all communities,” Balakrishnan said.

“Otherwise this long-term, inter-communal, complex situation will fester. If this festers, it will create more opportunities for extremism and, ultimately, terrorism, which will not respect boundaries and will represent a clear and present threat throughout South-east Asia and beyond,” the minister added.

Balakrishnan stressed that for ASEAN, compulsion and force of law were not options for addressing the situation.

“But what we can do, through moral suasion, persuasion, transparency and keeping this on the agenda … and also telling the Myanmar government that we want and hope for a long-term, viable, good outcome, and ASEAN stands ready to help,” he said.