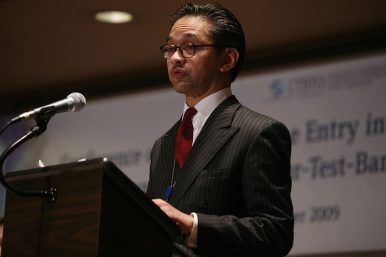 Marty Natalegawa, a seasoned Indonesian diplomat who last served as foreign minister under former President Susilo Bambang Yudhoyono, has long been regarded as one of the champions of the ten-member Association of Southeast Asian Nations (ASEAN) regional grouping.

In his previous roles including as foreign minister, Natalegawa dealt with a number of formidable challenges that the grouping faced, from border clashes between Thailand and Cambodia to the management of the South China Sea disputes. Even after ending his tenure as foreign minister, he has continued to remain active in speaking and writing about regional developments, being candid about the issues ASEAN faces but also still hopeful that the region will be able to address them if the right steps are taken.

Natalegawa has now captured the essence of those years in his book Does ASEAN Matter? There is no surprise answer here for anyone who has heard Natalegawa muse on the bloc. His answer is an emphatic yes, but there’s always room for improvement, he told The Diplomat on the sidelines of the Ubud Writers and Readers Festival late last year, reflecting the spirit of his new book.

The importance of the Association of South East Asia Nations (ASEAN), which Thailand hosts this year, has faced criticisms in recent years over failures to act or intervene in human rights abuses or attacks on democracy within the region. This not a bug but a feature of ASEAN, and Natalegawa knows this better than most. With the book written as the latest flare of violence against the Rohingya people in Myanmar flashed, it rarely touches on the historic persecution of the minority. Rather, it picks key moments in his career to pull back the curtain somewhat on how diplomacy is conducted despite the restraints of the bloc.

Myanmar features heavily here, and Myanmar’s transition to democracy still clearly weighs heavily on Natalegawa. With the 2011-2015 reformation period aligning near perfectly with his time as foreign minister, his front row seat to the regional efforts and implications feature heavily throughout the book. He compares the transition to the South China Sea disputes, in that both instances have been a “litmus test for ASEAN’s ability to manage the challenges of the region’s affairs.”

While ASEAN operates from a non-interference principle, concerns flew that the bloc’s global reputation would be undermined by the chaos as well as drive a wedge through ASEAN unity as Myanmar occupied the bloc’s energy. “Time and again, ASEAN meetings were consumed by the developments in Myanmar, to the detriment of other ASEAN endeavours,” he writes of the era.

It’s here that Natalegawa makes his case for the importance of Indonesian leadership. Despite a formal principle of equality among all member states, Indonesia’s sheer size economically, population-wise and geographically often thrusts it into a de facto leadership role. Natalegawa points to two key experiences in Indonesia’s recent history as giving the country a unique qualification in leadership — the democratic transition post-1998 and the Timor-Leste conflict and post-conflict realignment of relations.

Throughout Does ASEAN Matter? he recounts efforts to guide and advise other member states based on those lessons learned. “I intimated to my Myanmar counterparts that Indonesia’s own experience on Timor-Leste suggested that it would be in Myanmar’s interest to have an engaged and informed ASEAN, able to effectively and credibly lend support in the face of international criticism,” he writes.

He sees ASEAN as a promoter of democracy — although he is quick to remind the bloc is not seeking to transform and pressure non-democratic states — and the post-1998 democratic transformation in his own Indonesia has inspired that view. While the book is a fairly straightforward account of the incidents and develops which define Natalegawa’s era at the top of regional diplomacy, it does often occasionally veer toward making a case for his deeper held personal convictions.

The long-touted membership of Timor-Leste is one such recurring conviction. This is clear from his depiction of the issue in the book.

“Timor-Leste’s admission to the wider ASEAN family of nations, having formally chosen separation from Indonesia, would help widen the area of peace and stability in Southeast Asia” he writes. That the two countries now enjoy a positive relationship is an outlier globally, he says pointing to the split of the Soviet Union and more recently Sudan leading to regional chaos.

But, he says in Bali, the recognition of what he calls the “special relationship” risks being forgotten as the decades pass. “There was a moment in the recent past, a critical window of opportunity where we had a leadership in Timor-Leste and a leadership in Indonesia which had gone through difficult years together,” he says, referring to the immediate post conflict years. “I’m not sure to what extent current and future generations of leadership in Indonesia and Timor-Leste consider that.”

Beyond large questions on Timor-Leste’s ability to commit to a grueling schedule of meetings and summits, or for its developing industries to thrive amid other regional economies, without Indonesia’s rallying cry, full membership to the bloc seems further away than ever. Natalegawa points to an increasingly risk-averse mentality within ASEAN. “They may ask themselves the question, do they need to the added potential for complications of having another member state? And given their principle of consensus decision making it could make decisions even more complicated,” he says.

Still, the general cynicism of membership does not undermine his personal view. “I think Timor-Leste’s mission to ASEAN is of critical importance,” he says, reiterating a point made repeatedly throughout Does ASEAN Matter? that an eleventh member of ASEAN is vital to regional stability and prosperity.

All in all, for all the challenges ASEAN continues to face, in his book as well as in his public remarks, Natalegawa still retains a glimmer of hope that the regional grouping will be able to rise to these challenges by drawing on some of the lessons it has learned in the past. Whether or not it will be able to do so, however, remains to be seen.