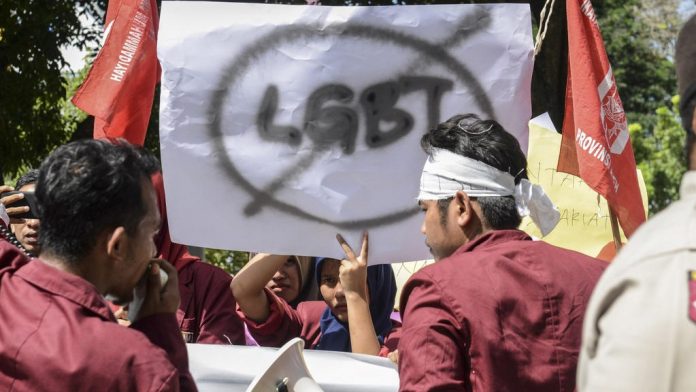 South China Morning Post: An Amnesty International researcher says the persecution of Indonesia’s LGBTI community is escalating and is not just limited to conservative Muslim areas.

JAKARTA — Amanda, who identifies as bisexual, whispers about deep fear and frustration in Indonesia’s LGBTI community. Fajri, a 29-year-old gay cartoonist from Jakarta, says police raids on homes and nightclubs have made for an atmosphere scarier than anything he’s seen in years.

And Mr Papang Hidayet, a veteran researcher for Amnesty International, says what he sees in his once-tolerant country is as worrying as it is irrational.

These are just a few of the voices emanating from Indonesia, where a wave of arrests, state-sanctioned discrimination and public hostility has struck terror into the gay community. Rights groups and LGBTI activists now warn that the situation could deteriorate even further ahead of national elections in April.

“It’s definitely getting worse,” said Mr Hidayet by phone from Jakarta. “The persecution of the LGBTI community is escalating, becoming more systemic and it’s happening everywhere, not just in conservative Muslim areas.”

The motivation behind the anti-LGBTI campaign, which Human Rights Watch has called a “government-driven moral panic about gender and sexuality”, offers little mystery.

The rising influence of hardline Islamist groups looks set to play a crucial role in next year’s vote, and as Mr Hidayet puts it, “religious identity has become populist politics, all politicians are using religion to appease their base”.

Both candidates are have pandered to conservative forces. Indonesian president Joko Widodo, a moderate, has chosen as a running mate Mr Ma’ruf Amin, a formidable 75-year-old Islamic cleric and scholar.

The challenger, Mr Prabowo Subianto, was generally seen as the more religious candidate when he narrowly lost a hard-fought race to Jokowi in 2014 – and this year he seems eager to raise the stakes.

On Sunday, he led tens of thousands of supporters in Jakarta in a “reunion” for a series of late 2016 rallies that targeted the former Jakarta governor Basuki Tjahaja Purnama, who is known as Ahok.

An ethnic-Chinese Christian and close Jokowi ally, Mr Ahok was charged with insulting the Quran and sentenced to blasphemy charges. The conviction was largely based on testimony from Mr Amin, and some observers point to this as a foundational moment in the nation’s conservative drift.

Against this backdrop, troubling questions have arisen about the political future of Indonesia, home to more than 12 per cent of all Muslims and the world’s third-largest democracy.

For one, if playing the anti-LGBTI card is good politics, what will be the long-term effects to the LGBTI community? And perhaps more important: what cost will it have for Brand Indonesia – an economically booming nation that has no national laws against same-sex unions, has nurtured dozens of pro-LGBTI organisations dating to the 1980s, and that has always lived by a mantra of “unity in diversity?”

This year in Indonesia has been marked by a string of anti-LGBTI episodes, each more disturbing than the last.

Last month, 10 women were arrested and accused of being lesbians based on pictures posted on Facebook. Also in November, the mayor of Padang, the capital of West Sumatra, led thousands of followers in a march against the “sinful”LGBTI community, and reportedly issued a warning against those who might try to defend them.

In October, according to news reports, government officials in West Java called for policies that would target LGBTI people for arrest and “rehabilitation”.

Most troubling, last week the city of Pariaman in West Sumatra passed a regulation banning “acts that are considered LGBTI”. The deputy mayor told Reuters that the proposed public by-law was part of the city’s effort to “eradicate LGBTI”.

Mr Kyle Knight, a researcher at Human Rights Watch, has documented what he calls the “abusive and absurd” LGBTI rights crisis in Indonesia for several years. In an email exchange from New York, Mr Knight pointed out that the anti-LGBTI campaign is not ending – but rather becoming even more insidious.

“The current tension began nationally in January 2016, when Indonesia’s higher education minister Mohammed Nasir tweeted that he wanted to ban all LGBTI+ student groups from university campuses,” he wrote. “Within two months, dozens of public officials had contributed to a cascade of anti-LGBTI+ vitriol. Defence minister Ryamizard Ryacudu labelled gay and trans rights activism a ‘proxy war’ on the nation led by outsiders, and more dangerous than a nuclear attack.”

Mr Knight points to police raids throughout 2017 on “saunas, nightclubs, hotel rooms, hair salons and private homes on suspicion that gay or trans people were inside”.

Other consequential events, according to Mr Knight, may have gone unnoticed amid the “cacophony of anti-LGBTI statements from officials”. These episodes included the national psychiatric body calling homosexuality a “mental illness” and the national Child Protection Commission calling to protect children from “gay propaganda”.

The Indonesian government, the state-funded National Commission for Human Rights and the Consulate of Indonesia in Hong Kong all failed to reply to requests for comment on this report.

“What’s important to remember is that the anti-LGBTI moral panic that has engulfed Indonesia for nearly three years is not random bigotry,” Mr Knight told the Post, “but rather a government-driven campaign of scapegoating that has metastasised into outright violence and proposed policy changes.”

If there is a ray of hope amid the current anti-LGBTI crisis in Indonesia, it is almost certainly Mr Dédé Oetomo.

For more than 30 years, the 65-year-old has campaigned for rights and awareness in Indonesia and Southeast Asia. He is the founder of Gaya Nusantara, the first LGBTI rights organisation in Indonesia, and is an adviser for the Coalition for Sexual and Bodily Rights in Muslim Societies.

“We are fighting back: There is a national strategy,” Mr Oetomo said by phone from Surabaya, Indonesia. “We didn’t expect this, I’ll tell you that. We thought things in 2015 were getting better, but now we have put our national advocacy on hold and we’re focusing on local levels.”

He is reticent about details, but concedes he has met with foreign diplomats, some of whom have pledged “digital and physical support” as the anti-LGBTI crisis continues. “For an old activist like myself, you have to watch your back,” Mr Oetomo said.

He’s not alone. Mr Hidayet, the Amnesty researcher, points out that Indonesia was a “role model for decades in terms of tolerance”. He hopes the government’s anti-LGBTI rhetoric will unite the nation’s progressive factions.

“Indonesia is home for lots of contradictions. Human rights groups grew in the 1990s, including LGBTI organisations, but vigilante and hardline groups also grew. The trouble is that Indonesia politicians listened to the latter rather than the former – they weren’t worried about personal convictions, just about getting votes,” Mr Hidayet said.

“But in our country we have cultural proof: we accept LGBTI people.”

That may be so, but Mr Oetomo is quick to point out how politicians are playing their own games at the expense of the LGBTI community.

“It’s still the old story: if you are useful as a bogeyman they use you – and they’re using us right now.”