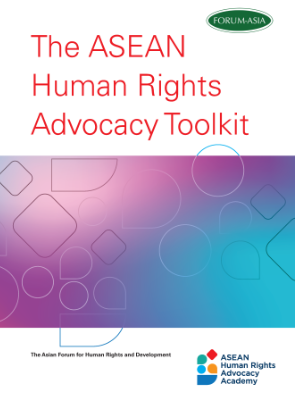 The ASEAN Human Rights Advocacy Toolkit is a refined and updated version of Rights Now! A Training Manual on ASEAN Human Rights Mechanisms was published in 2010 and authored by Human Rights Commission of Malaysia (SUHAKAM) Commissioner Jerald Joseph. Given the recent developments on human rights and democracy in the region, FORUM-ASIA found it imperative to rejuvenate the Rights Now! to encompass current trends and innovative activities.

In 2020, FORUM-ASIA surveyed partner organisations in Southeast Asia to gain insights into what tactics and strategies FORUM-ASIA can use to build an effective and robust ASEAN human rights advocacy. Most FORUM-ASIA partners conveyed the need to have a capacity-building module for civil society, academia, and the public, to understand more about ASEAN and its mechanisms. In response, FORUM-ASIA conceptualised and organised the ASEAN Human Rights Advocacy Academy held last September 2 to 30, 2021. FORUM-ASIA utilised several modules in this toolkit during the five-week workshop.

With this toolkit, FORUM-ASIA hopes to cultivate the knowledge and expertise of young people from Southeast Asian CSOs representing vulnerable and marginalised communities on the role of ASEAN and its human rights mechanisms. Given the success of the Academy, we hope that this toolkit can entice other CSOs to conduct capacity-building workshops like the Academy and pass on the torch to a new generation of human rights champions who will engage with ASEAN and its mechanisms in the upcoming years to come.

The toolkit consisted of six modules and one e-learning guideline.

These E-Learning guidelines are formulated to complement the ASEAN Human Rights Advocacy Toolkit modules. While the primary module was designed to be delivered in a classroom environment, the COVID-19 pandemic has made it pertinent also to make available ways to deliver the module in an “e- environment.” To put it simply, e learning, or virtual learning, is a learning process delivered on the internet.

Generally, e-learning can be organised in several approaches, such as (a) self-paced or independent and (b) facilitator or instructor-led. This module will utilise the third (c) blended learning approach. While blended learning usually refers to a mix of off-line class and internet-based self-study, in this module, blended learning refers to a training program that combines the core materials to be delivered through virtual classroom activities and led by facilitators and instructors, as well as self-paced independent studies with tasks and supporting materials made available online.

The Association of Southeast Asian Nations, otherwise known as ASEAN, is a grouping of ten Southeast Asian states: Brunei Darussalam, Cambodia, Indonesia, Laos, Malaysia, Burma (Myanmar), the Philippines, Singapore, Thailand and Vietnam. The group discusses regional issues and develops regional policies for Southeast Asia. On 8 August 1967, five leaders – the foreign ministers of Indonesia, Malaysia, the Philippines, Singapore and Thailand – sat down together in the main hall of the Department of Foreign Affairs building in Bangkok, Thailand and signed the ASEAN Declaration.

In this module, you will learn about the historical evolution of ASEAN, the ‘shifts’ the institutions has been experiencing, and its relation with its people.

Discussion on AICHR’s formation can be traced back to the World Conference on Human Rights in Vienna in 1993. In the Vienna Declaration and Programme of Action (VDPA), the world leaders, including the ASEAN Member States, reiterated “the need to consider establishing regional and subregional arrangements for the promotion and protection of human rights where they do not already exist”.

That same year, during the 26th ASEAN Summit in Singapore, the ASEAN Foreign Minister’s meeting adopted a Joint Communiqué reaffirming the VDPA and agreeing that ASEAN should consider the establishment of a regional human rights mechanism.

It was not until 2007, fifteen years later, that ASEAN incorporated human rights into its institutional structure.

IV. ASEAN Commission on the Rights of Women and Children

The ASEAN Commission on the Promotion and the Protection of the Rights of Women and Children (ACWC) is an ASEAN regional human rights institution established in 2010. It is an intergovernmental commission comprising 20 representatives, two from each of the ASEAN ten Member States.

ASEAN first called for the establishment of a commission on the rights of women and children in the 2004 Vientiane Action Programme (VAP). In 2009, this Commission was included as part of ASEAN’s community-building plan – the “Roadmap for the ASEAN Community (2009-2015)”.

ACWC’s TOR defines ACWC’s purpose, mandate and functions. ACWC’s primary purpose is to promote and protect the human rights and fundamental freedoms of women and children in ASEAN. ACWC is tasked with upholding rights contained in the Convention on the Elimination of Violence Against Women (CEDAW) and the Convention on the Rights of the Child (CRC), which all ten ASEAN Member States have ratified.

V. Towards an ASEAN Regional Instrument on Migrant Workers

Regionalism is one of the issues that come forth in international relations, and regional integration has occurred in many forms. With the evolution of regionalism that occurred after the Cold War and the increased realisation that the European model does not necessarily apply to other contexts, as well as the emergence of different types of regional integration projects,1 alternative regionalism has been studied more intensively. ASEAN for example, is seen as one of the alternative forms of regionalism with its “weak structure and ability to solve regional problems”, which is considered to be “an example of ASEAN-type open regionalism with a focus on the informal, consensus-oriented form of cooperation in the region without a strong institutionalisation and bureaucratization.”2

Therefore while the outside world sees ASEAN as an alternative to regionalism, ASEAN people themselves are seeking alternatives for a regional integration model that can ensure that the integration is designed and implemented with the people at the heart of its consideration. Tandem, for example, identified four gaps in movement-based networks in the region, namely that they tend to be disconnected from grassroots, conduct insufficient research and documentation and monitoring of popular initiatives, and lack the effort to mainstream the work of regional CSOs, including to grassroots organisations, and lack reflexive processes towards regional networks’ activities.