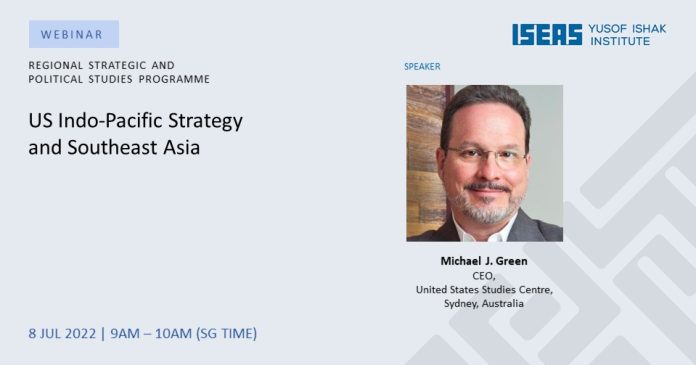 ISEAS-Yusof Ishak Institute will organize a webinar on the US Indo-Pacific Strategy and Southeast Asia this 8 July 2022 from 9:00 am to 10:00 am (Singapore/GMT+7).

As the United States and its major allies and partners organize to compete against an increasingly assertive China and belligerent Russia, can Southeast Asia maintain its core tenets of foreign policy strategy such as ASEAN centrality and avoidance of great power collision? Is the Biden administration attuned to concerns with ASEAN? Will the Quad, AUKUS, and Asian allies’ growing connection to NATO leave room for ASEAN’s agency in the international relations of Asia?

Dr. Michael Green, Chief Executive Officer of the United States Studies Centre in Sydney and former Senior Director for Asia in the US National Security Council staff will decipher trends in US strategy towards the Indo-Pacific and the implications for Southeast Asia.

Dr. Michael J. Green is CEO of the United States Studies Centre in Sydney, Australia and Non-Resident Senior Advisor and Kissinger Chair at the Center for Strategic and International Studies (CSIS) in Washington. He was previously Senior Vice President for Asia at CSIS and is on leave from Georgetown University where he served as Director of Asian Studies. Prior to that, he was Special Assistant to the President and Senior Director for Asia on the National Security Council Staff in the administration of George W. Bush. Dr Green has authored numerous books and articles on East Asian security, including most recently, By More Than Providence: Grand Strategy and American Power in the Asia Pacific Since 1783 (Columbia University Press, 2017) and Line of Advantage: Japan’s Grand Strategy in the Era of Abe Shinzō (Columbia University Press, 2022).