Home CSO Events Monarchy, Nation-Building and Struggle in Thailand: Past, Present and Future? 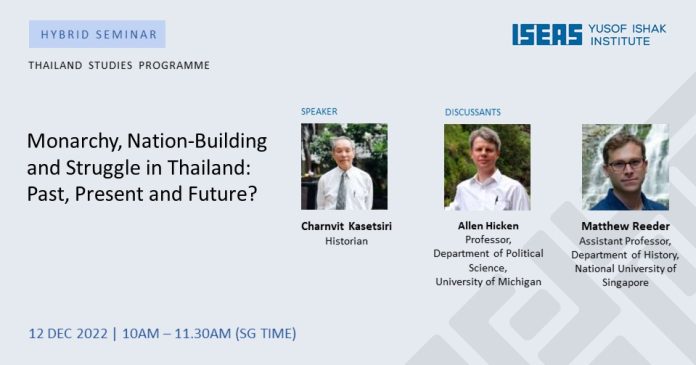 The ISEAS Yusof Ishak Institute will organize a hybrid seminar titled “Monarchy, Nation-Building and Struggle in Thailand: Past, Present and Future?” on 12 December 2022 from 10:00 am to 12:30 pm at the ISEAS Seminar Room 1 and 2.

Thailand’s monarchy had a central place in the history of the country’s “nation-building” in the post-1945 era. The Thai elite’s apparent ability to integrate the country’s diverse population and cultivation of a national pride marked by tolerance also defined that era—an era that coincided with most of the long reign of King Bhumibol Adulyadej. These accomplishments served as the bases for growing prosperity and an image of national success.

King Bhumibol’s reign had strong parallels with that of his grandfather King Chulalongkorn. These parallels extend to the aftermaths of the two kings’ reigns. Today, the spectre of authoritarianism—along with urban-rural and class divisions, and challenges to Thailand’s benign image—defines many aspects of the country’s affairs.

Too register for the hybrid event via Zoom, click here.