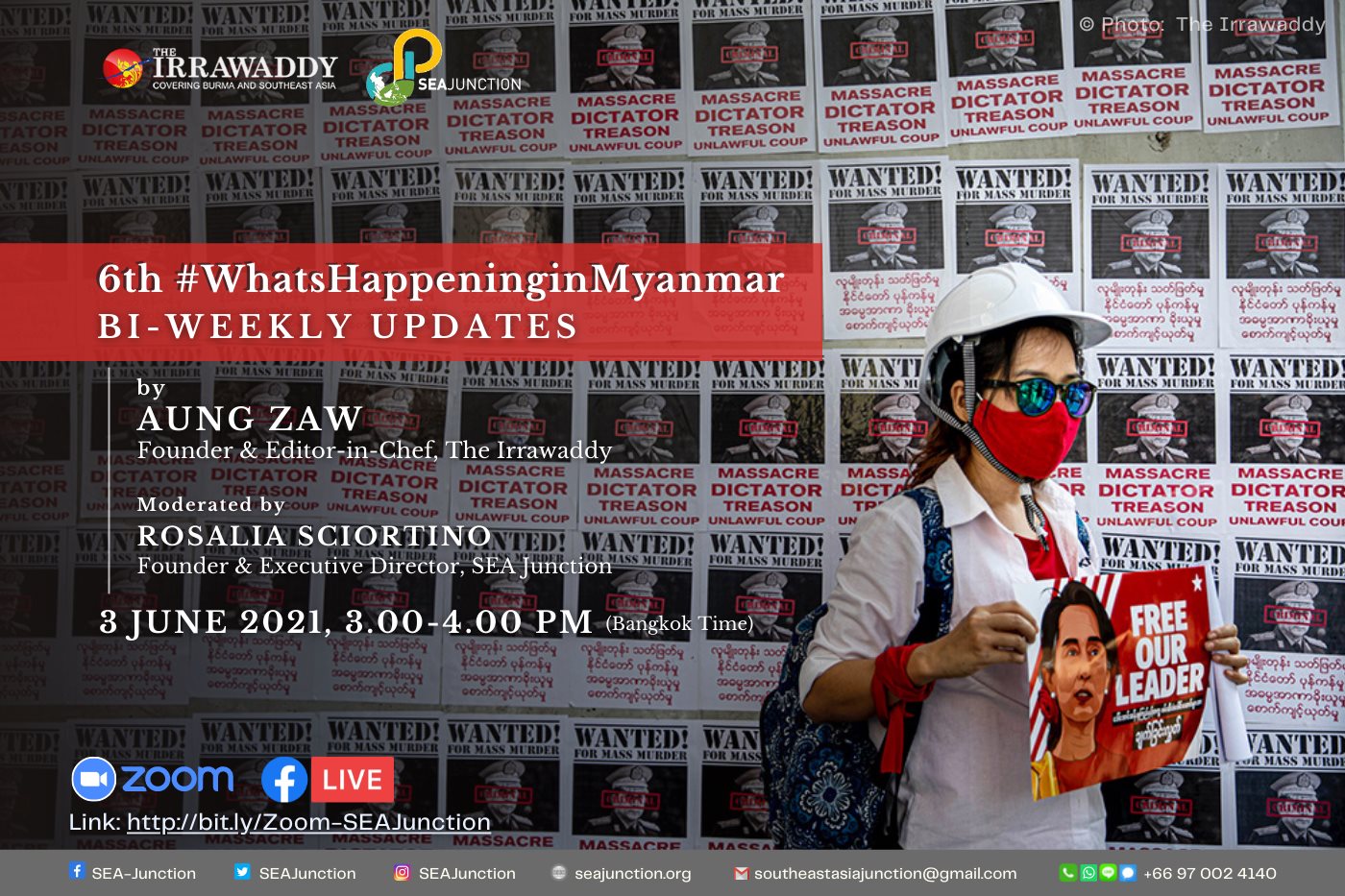 The Irrawaddy and SEA Junction have joined together to provide bi-weekly updates on the latest developments in Myanmar. Since 1 February 2021, Myanmar has been in turmoil as the Myanmar army, known as the Tatmadaw, detained State Counselor Aung San Suu Kyi and President Win Myint following a general election which Suu Kyi’s NLD party won by a landslide. The coupled by General Min Aung Hlaing brought an end to a decade of semi-democratic rule and returned full power to the military.
.
Courageously, the population has been resisting and demanding the release of the imprisoned leaders and the restoration of democratic rule. A massive civil disobedience movement has emerged and hundreds of thousands are taking to the streets in spite of the military’s use of lethal force against protesters. At least 818 people, a majority of young age and even children in their own homes, have been killed and more than 4,296 people, including journalists, have been arrested. The global community has overall condemned the coup and the military abuses, but concerted diplomatic interventions are still too bland.

After the ASEAN Leaders’ Summit resulting in the disappointing 5-point consensus plan that avoided mentioning release of prisoners, the Burmese military stated that they would only carefully consider the demand of ending violence after the situation stabilized. While the future of Myanmar is in the hands of its people, international and regional bodies ought to isolate the military junta, ban arms, embargo business by the militaries and their cronies and address gross violations of international human rights and humanitarian law.

In these dramatic times, as The Irrawaddy writes on its website “information, analysis and truth are precious commodities” in the struggle for justice and freedom.

The series #WhatsHappeninginMyanmar Bi-Weekly Updates aims to contribute to a greater understanding of the current situation in Myanmar for informed action in support of the democratic movement in Myanmar and beyond. Started on 25 March 2021, the updates will be held every two weeks over the next three months. The Irrawaddy’s Founder and Editor-in-Chief Aung Zaw will provide an analysis of the latest events for about 20 minutes before opening the floor for questions and answers. This sixth update is planned for Thursday, 3 June 2021 at 3pm (Bangkok/Jakarta time).
.
The one-hour-long update will be moderated by SEA Junction’s Founder and Director Rosalia Sciortino and will be held via Zoom and livestreamed on SEA Junction’s Facebook Page. For Zoom, there is space for maximum capacity of 100 people and interested people can register and join using this link.

The series of updates is also meant to help The Irrawaddy in their fund-raising campaign to continue to provide quality and impactful journalism every day. For more information and to donate please click here.