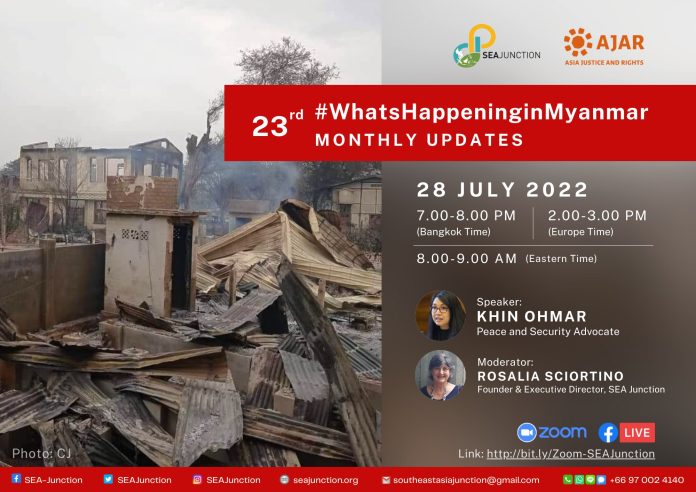 The Southeast Asia Junction (SEA Junction) in collaboration with Asia Justice and Rights (AJAR) will hold the 23rd #WhatsHappeninginMyanmar Monthly Updates on 28 July 2022 from 7:00 to 8:00 pm (Bangkok Time). This update series was started soon after the coup d’état in Myanmar with the aim to contribute to a greater understanding of the crisis situation there for informed action in support of the democratic movement in the country and beyond.

Since February 2021, Myanmar has been in turmoil as the Myanmar Army, known as Tatmadaw, detained State Counsellor Aung San Suu Kyi and President Win Myint following a general election which Suu Kyi’s NLD party won by a landslide. The coup by General Min Aung Hlaing brought an end to a decade of semi-democratic rule and returned full power to the military. Courageously, the population has been resisting and demanding the release of the imprisoned leaders and restoration of the democratic rule and the National Unity Government (NUG) has been formed by the Committee Representing Pyidaungsu Hluttaw (CRPH), a group of elected lawmakers and members of parliament ousted in the coup. Economic collapse amid escalating conflict is making of Myanmar a failed state, with many leaving the country in search of refuge and opportunities. The global community has overall condemned the coup and the military abuses, but concerted diplomatic interventions are still too bland. After more than one year of the coup, ASEAN has been excluding Tatmadaw representatives from their summits, but still fails to recognize NUG as the legitimate representative of Myanmar. While the future of the country is in the hands of its people, international and regional bodies ought to isolate the military junta, ban arms, embargo business by the militaries and their cronies, address gross violations of international human rights and humanitarian law and provide humanitarian relief to the population.
The updates are meant to be short informal dialogues with a speaker who provides an analysis of the latest events in the preceding two weeks for about 20 minutes before the moderator, SEA Junction’s Founder and Director Rosalia Sciortino, opens the floor for questions and answers. Initially the updates were held bi-weekly and lasted from March 2021 to March 2022 with speakers Aung Zaw, Founder and Director Irrawaddy; Khin Ohmar, a well-known Peace and Security Advocate; Debbie Stothard, an active promoter of human rights in Burma and the ASEAN regions; and May Zin Thaw, the founder of a local think tank institute Researchers’ Republic.

After few months of break to evaluate the series, we feel there is still an urgent need to keep Myanmar on the public agenda in the midst of many other global worries as the situation continues to worsen in the country. The now-monthly updates are going to restart with one of our previous resource persons Khin Ohmar who has been much appreciated by the public for her comprehensive reviews of the evolving situation.

To participate, turn in for the monthly update planned for 28 July 2022 at 7-8 pm (Bangkok Time) via Zoom (Link: http://bit.ly/Zoom-SEAJunction) and Facebook Live.