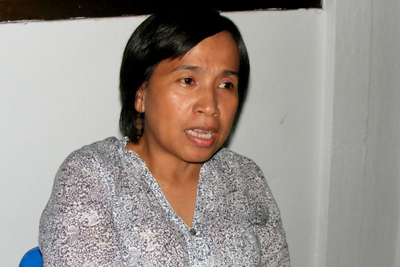 Papuan human rights lawyer Anum Siregar was attacked by an unknown person in Wamena, Papua province. She is currently defending a tribal leader who is a prisoner of conscience accused of supporting separatist activities. There are concerns for her safety.

Papuan human rights lawyer Anum Siregar was attacked by an unknown person in Wamena, Papua province. She is currently defending a tribal leader who is a prisoner of conscience accused of supporting separatist activities. There are concerns for her safety.

Amnesty International has received information about an attack on human rights lawyer Anum Siregar in Wamena, Papua province. Anum Siregar was attacked by an unknown person at about 11pm on 16 September on the way back to her hotel from a court hearing. The attacker, armed with a knife, stole her bag and injured her hand before fleeing the scene. Anum Siregar received treatment for her injuries at Wamena hospital, requiring at least two stitches.

Anum Siregar and another lawyer had travelled from Jayapura to Wamena to represent Areki Wanimbo, the Head of the Lani Besar Tribal Council, at a pre-trial hearing. When they arrived both felt they were being monitored. They were challenging Areki Wanimbo’s arrest and detention which they believe to have been unlawful and in violation of Indonesia’s Criminal Procedure Code. Areki Wanimbo was arrested on 6 August after meeting two foreign journalists who were making a documentary on the separatist movement in the Papuan region. He was accused of supporting separatist activities and charged with “rebellion” under Articles 106 and 110 of Indonesia’s Criminal Code. Amnesty International considers Areki Wanimbo to be a prisoner of conscience.

Anum Siregar is a respected human rights lawyer and has represented numerous victims of human rights violations in Papua for over a decade. She is also the Director of Alliance of Democracy for Papua (ALDP), a human rights organization in Papua. There are continued concerns that she might face retaliation for her human rights work.

Under Article 2 of the UN Declaration on Human Rights Defenders, each state has a duty to create the conditions necessary to defend human rights within their jurisdictions. However, Amnesty International continues to receive credible reports of attacks against human rights defenders (HRDs) and journalists in Indonesia, and HRDs are regularly intimidated and harassed in the Papua region.

International human rights observers, non-governmental organizations and journalists are severely restricted in their work in the Papua region. Two French journalists arrested by police on 6 August 2014 in Wamena, Papua province, remain in detention for immigration violations. Thomas Dandois and Valentine Bourrat were reportedly making a documentary on the separatist movement in the Papuan region.

The denial of free and unimpeded access to these provinces limits independent reporting of the human rights situation there. In May 2013, the then UN High Commissioner for Human Rights, Navanethem Pillay, urged Indonesia to “allow international journalists into Papua and to facilitate visits by the Special Rapporteurs of the UN Human Rights Council”.

Most past human rights violations against HRDs in Indonesia, including torture and other ill-treatment, possible unlawful killings and enforced disappearances, remain unsolved and those responsible have not been brought to justice. Besides continued reports of intimidation and attacks against HRDs, they have also been the subject of criminal defamation proceedings due to their work.

Amnesty International calls on the Indonesian government to ensure an environment in which it is possible to defend human rights without fear of reprisal or intimidation. Further, the Indonesian government should establish special mechanisms to protect HRDs, ensure human rights violations committed against HRDs are promptly, effectively and impartially investigated and that those responsible are brought to justice in fair trial proceedings. HRDs who have been victims of abuses due to their work should also be provided with reparations.

Also send copies to diplomatic representatives accredited to your country.

Please write immediately in Indonesian, English or your own language:

Urging the authorities to take immediate action to ensure the safety of Anum Siregar, in accordance with her wishes;

Urging them to conduct a prompt, independent and impartial investigation into any allegations that this attack was linked to Anum Siregar’s work as a human rights defender;

Calling on the authorities to immediately and unconditionally release Areki Wanimbo as he is a prisoner of conscience, arrested solely for the peaceful exercise of his right to freedom of expression;

Establish special mechanisms to ensure the protection of human rights defenders in Indonesia.