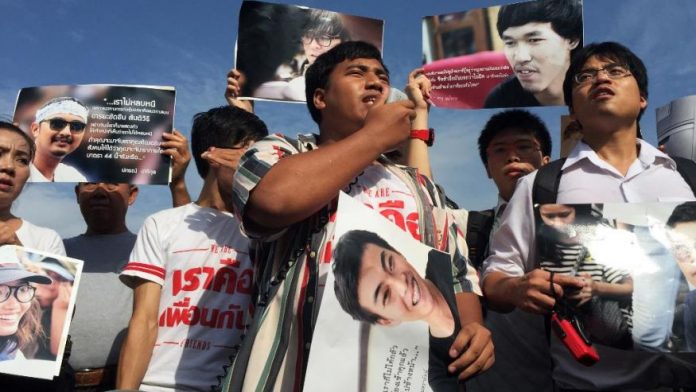 Down with dictatorship! Democracy must prevail!

Since the 22nd May 2014 coup d’état, student groups are undeniably one of the leaders in protesting against the coup. They are from various universities, academic disciplines, regions and backgrounds. They may have numerous different political stances, but they come together under one ideal – coups d’etat are illegitimate and must not happen. What the junta, led by Gen. Prayut Chan-ocha, has done was using force to take away from the people their sovereignty and violate a great number of human rights.

The students who protest against the coup have done so constantly and peacefully. They use new, creative ways to protest, using mainstream pop culture and everyday things. They eat sandwich, read 1984, and hold three-finger salute which are symbolical expressions intended to defend and exercise civil and political rights as well as to challenge the derive of power that disconnected from people’s will and support. The movement’s goal, in particular, is the defense of the rights to vote which is the main pillar of political participation in the time of democracy and deteriorated by the atmosphere of fear under the military authoritarian regime. Despite the creative and peaceful ways, however, the students have always been threatened by the Military and the Police. Some are “invited” to the police station until they are familiar faces among the officers.

The latest abuse began on 22nd May 2015, when a group of students gathered at Bangkok Art and Culture Centre to peacefully “look at the clock.” The students were physically injured and arrested by officers who greatly outnumbered them. On the same day, at Khon Kaen Democracy Monument, Dao Din, another group of students peacefully held signs expressing discontent with the coup. They were also detained. They were released, but summons were issued for 16 of them. On 24th June 2015, the students and activists gathered peacefully at Bangkok Art and Culture Centre. Then they joined Dao Din at Patumwan Police Station, Bangkok, not to surrender, but to confirm their innocence and report the officers’ misconducts on 22nd May that caused bodily harm to student demonstrators. (Those officers consisted of military officers, police officers, and plainclothesmen.) Even though the report was accepted, the military court continued to issue arrest warrants and arrested 14 students on 26th June 2015. They are now in jail, and will be so until 7th July 2015, 12 days after the arrest. After that, they may face military court.

As a part of students in European countries, countries which have seen intense struggles for democracy, we have great respect for the courage of the 14 students. Not only are they a great example of intellects, whose duty is to think, write and express their critical mind, but also they are an example of regular people who assert their rights, sacrificing what little they have under dictatorship. Today, they are imprisoned just because of their peaceful expressions that aren’t in line with what the government wants the people to think. They are treated as though they were criminals. Troops of police surround them whenever tens of them gather. In addition, plainclothesmen follow and put psychological pressure on them constantly. They have shown that dictatorship is afraid of differences, and are always ready to overreact.

As a part of students in European countries, we believe that higher education anywhere in the world has a duty of encouraging their students to think, speak and express what they believe in with reasons. We believe that differences in ideas are normal and necessary. Without arguments, there will be no progress in any discipline, and the society will never move towards democracy. We believe that knowledge, thoughts and truth we hold should not put anyone in a serious bind that these Thai students are facing now.

Therefore, we declare the following:

Down with dictatorship! Democracy must prevail!