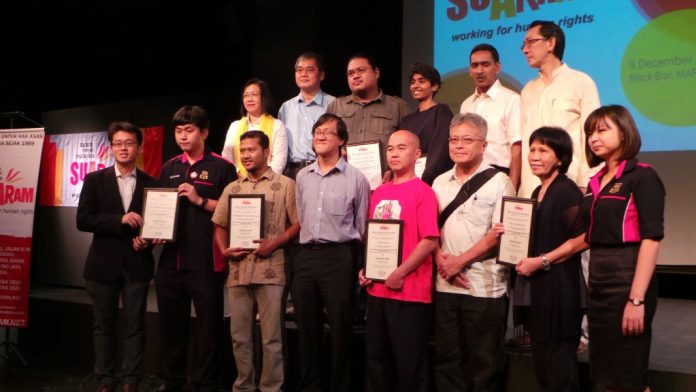 On 9 December, in conjunction with the 64th annual international Human Rights Day and the 25th anniversary of SUARAM, SUARAM is pleased to announce that the winners of its 16th annual Human Rights Award in 2014 are Dapur Jalanan and Transgender Community in Seremban

On 9 December, in conjunction with the 64th annual international Human Rights Day and the 25th anniversary of SUARAM, SUARAM is pleased to announce that the winners of its 16th annual Human Rights Award in 2014 are Dapur Jalanan and Transgender Community in Seremban.

A total of six groups were nominated for the award and were evaluated by judges according to three criteria. These are that the group must have struggled persistently and fearlessly in defending rights, justice and dignity against oppression, successfully organized, empowered and activated their people in the process of promoting and protecting human rights, and impacted human rights in 2014.

In explaining the decision, the Judges stated they could not decide on one winner, due to the inherent differences between the two groups. They stated that the Transgender Community Seremban is a group whose rights are constantly and severely oppressed and that they are in a continual struggle to challenge deep-seated taboos in Malaysia. The award recognises the community’s victory in the Putrajaya Court of Appeal, garnering recognition by the legal system of the dignity and rights of transgender people in the country. The judgment has fundamentally changed and enlivened the dialogue about LGBT rights in Malaysia.

Dapur Jalanan, the second winner, was recognised for their relentless work in not only providing humanitarian services of cooking and preparing food for the homeless and destitute persons, but also their effort to go beyond welfare services in addressing the structural problems of poverty and empowering homeless and destitute persons to defend their own rights and dignity. The award recognizes the struggle of Dapur Jalanan in asserting their rights in the face of threats from government and bans of providing free food to the urban poor in the city of Kuala Lumpur. While they have won the battle to continue their activities, they are facing another uphill task of stopping the amendments to the Destitute Persons Act that is going to criminalise acts deemed to be begging and provide welfare officers with police-like power in apprehending homeless people.

Suaram extends our appreciation to Prof Zaharom Nain for his contribution of RM1000 for the prize money of the human rights award.

Suaram annual human rights award expresses our recognition and solidarity with those who have worked to support and advance the cause of human rights. The award is not only a celebration of those tirelessly fighting for human rights in Malaysia, but also an opportunity to foster solidarity and reflect on what the current state of human rights means for all Malaysians as we continue forward in our work.