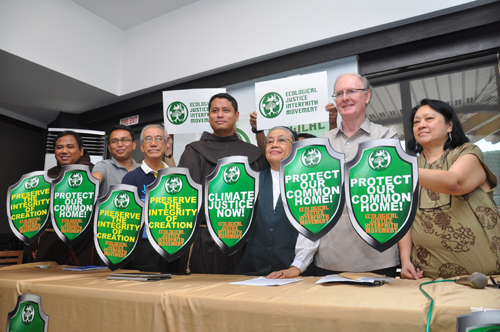 In response to these pressing realizations, we, members of the Ecological Justice Interfaith Movement, representing the growing faith-based movements and networks within the country and across the globe in the fight for climate justice, enjoin people of all faiths and beliefs to share in the collective responsibility of addressing the ecological crisis.

“What good is it, my brothers and sisters, if someone claims to have faith but has no deeds? Can such faith save them?”[1]

By the way current and dominant systems and attitudes stand, faith without actions might not be enough to save individuals, but the planet in its entirety as well.

Primarily driven by climate change, an ecological crisis is manifesting itself through extreme weather events, droughts, ocean acidification, and food and water crisis. Such was reflected in the unities made in the National Conference on the Integrity of Creation last July 29-31 in Manila.  This re-echoes Pope Francis’ call and Encyclical “Laudato Si” for a new, universal solidarity to address our urgent task to protect our common home.

In response to these pressing realizations, we, members of the Ecological Justice Interfaith Movement, representing the growing faith-based movements and networks within the country and across the globe in the fight for climate justice, enjoin people of all faiths and beliefs to share in the collective responsibility of addressing the ecological crisis.

Amid the numerous impacts primarily being experienced by the poor and most vulnerable people in different countries, there is not a more opportune time than now in acting and standing against a system that utilizes and promotes the exploitation of natural and environmental resources for it to survive. Allowing this system of exploitation to continue only disparages the integrity of all creation and widens the gap between the rich and the poor, instead of encouraging compassion and cooperation.

It is in this light that we acknowledge and declare climate change, including all acts of environmental destruction and exploitation that come along with and as a result of it, as a crosscutting issue that transcends religion, culture, science, and politics. As we ready ourselves for the battle for our common home before us, we call on everyone to prepare and put on a full armor that will enable us to stand and not lose hope in this decisive fight.

The belt of moral, historical and scientific truths

The ecological and climate crisis not only requires our faith-based responses but also a science-driven discourse as well. Instead of contradicting each other, empirical data has supported and complemented what our faith has taught us to do: become good and caring stewards of all creation or face dire consequences.

According to the 5th Intergovernmental Panel on Climate Change (IPCC) Assessment Report, more people will become poorer because of climate impacts, particularly its effects on agriculture. Armed with this knowledge, it is utterly irresponsible and immoral, to turn a blind eye to the cry of the poor which is now one with the cry of the earth.

The window for keeping global temperature to prevent catastrophic effects – below 1.5 degrees – is rapidly closing. If current trends and carbon emissions continue, the planet is destined for a 4°C or even 5°C rise in global average temperatures. The potential consequences of this temperature rise are unimaginable, considering the various impacts being experienced right now with a 0.8°C increase in temperature.

Upon knowing these truths, it is imperative that immediate actions and efforts be undertaken in order to generate an alternative future that is far from the grim picture being predicted and presented to us.

The breastplate of moral righteousness and social justice

The fight for climate justice is not merely an act of kindness or goodwill. It is our moral obligation to ensure that no rights are trampled upon and no duty is forgotten. We must take it upon ourselves the valiant task of securing and protecting people’s right to energy, to sufficient, healthy, and appropriate food, water, and livelihood, and to the security of possessions and homes from climate impacts.

This task enjoins that local, national, and international institutions to fulfill their roles and duties to the people. Transparency and accountability, especially in the area of finance, are crucial in transforming our market-oriented and profit-driven system into a people-centered and poor-friendly system that exhibits the concept of common good.

This task also means building climate-resilient and stronger communities to protect the most vulnerable members of our society who do not have the means and the ways to adapt to the changing climate by themselves. Strengthening adaptation measures are more than charity; they are the means by which we safeguard the lives and rights of all people regardless of their social and economic status. Their protection rests in our hands as a movement and as members of the same human race.

With private and transnational corporations continuously neglecting this notion of common good, it should nowe become our common responsibility to remind them that the earth and its resources are finite and therefore, more sustainable practices and means to meet all people’s needs must be employed.

The shield of faith

The enormity in scale of the fight for climate justice is less frightening when viewed through the lens of faith. No matter how ambitious or bold our intentions and actions may seem, we are still emboldened to speak out and act in the belief that in these collective voices and actions will our faith be made full.

Every victory, no matter how small or short-term, leads us closer and closer to the ultimate goal of transforming the system that is currently ushering us towards catastrophic climate change. It is in these little victories that we gather the hope and encouragement we need that will enable us to fight the good fight of faith and finish the race.

This global crisis is as much a spiritual crisis as it is an environmental and political crisis. As an inter-faith movement, it is only fair and just that we humbly recognize and acknowledge the faults and failures that we have committed to the environment as well. It is by beginning with genuine repentance and desire for change will we be able to achieve authentic ecological conversion that will be by all and for all, and produce the fruit of love for the environment and our fellow creations.

Armed with these necessary tools, the Ecological Justice Interfaith Movement boldly urges relevant institutions of all creeds and all countries to unite towards a renewed appreciation of our common role as stewards of the environment and keepers of our neighbors.

We enjoin the people of developed countries of the North to heed the call of the brothers and sisters in the developing South: to base their commitment to cut emissions and fund climate justice efforts on a centralized, historically-responsible assessment of their vast contributions to the ecological crisis.

We enjoin the Philippine government to side and stand in solidarity with the poor, vulnerable communities it claims to represent. It must not use the faith and resilience of character Filipinos have to justify its shortcomings in responding to their need for food, land, water and livelihood, as well as just adaptation measures.

The Philippine government must also be the leader in holding developed countries accountable for their environmental faults, not settling for loans and rhetoric but just reparations for the damage the country continually sustains.

Finally, we demand all governments of the world, as well as international funding institutions to stop investing on fossil fuels and begin the transition to a more sustainable, more ecologically-responsible and socially just renewable energy system.

The path to deliverance always begins with the admission of faults, justice and a renewed paradigm. This is also true in the context of ecological justice. Whether in small acts in our community or in the systemic ways of life we utilize as nations and as a species: our beliefs, our faith must reflect in our actions. Through this, we preserve not only our own integrity, but the integrity of the rest of creation.