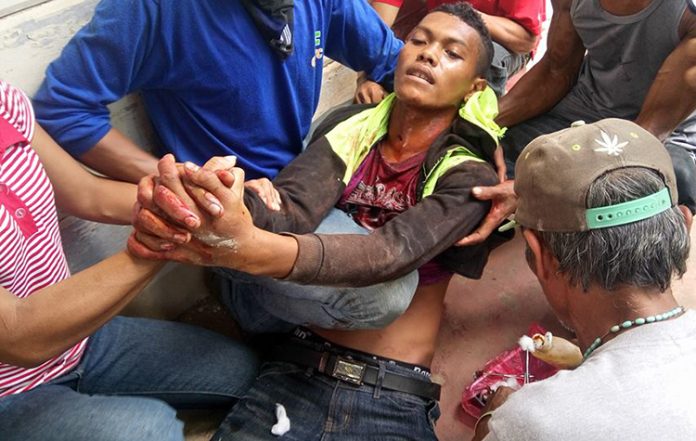 (Bangkok, 8 April 2016) The Asian Forum for Human Rights and Development (FORUM-ASIA), in solidarity with its members, the Philippine Alliance of Human Rights Advocates (PAHRA), Task Force Detainee of the Philippines (TFDP), the PILIPINA Legal Resources Center (PLRC) and Tanggol-Kalikasan – Public Interest Environmental Law Office (TK), strongly condemns the deadly police crackdown on a farmers protest in Kidapawan City, Cotabato Province on 1 April 2016. The violent crackdown resulted in at least 2 causalities among the protesters and a total of 116 wounded from both sides. As of 7 April 2016, 70 people have been arrested and direct assault charges have been filed against them.

On 30 March 2016, around 5,000 protesters, mostly farmers and Lumads, assembled on the Cotabato-Davao Highway in Kidapawan City. They asked for rice distribution and subsidy from the Government to support those who have been severely affected by the disastrous drought, a result of climate change, in the past months. Reportedly, the local Government of Cotabato Province and Kidapawan City had refused to release the rice assistance to farmers.

The protest went peacefully until the morning of 1 April 2016 when Philippine National Police (PNP) started to disperse the protesters by using a water cannon and breaking up the protesters’ barricade. The protesters fought back by throwing stones and poles at police officers. The police opened fire on the protesters, which resulted in at least 2 people being killed and 116 injured. A number of protesters were charged for blocking the highway

“We denounce the use of live ammunition against unarmed protesters. The reaction of the PNP was excessive and disproportionate.  This is a serious human rights violation committed by state officials whose duty it is to protect people,” says Evelyn Balais-Serrano, the Executive Director of FORUM-ASIA.

The right to freedom of assembly is guaranteed under Article 4 of the Constitution of the Philippines, as well as the International Covenant on Civil and Political Rights to which the Philippines is a signatory party.

In the latest joint report of the UN Special Rapporteur on the rights to freedom of peaceful assembly and of association, Maina Kiai, and the UN Special Rapporteur on extrajudicial, summary or arbitrary executions, Christof Heyns, it is clearly stated that when it comes to the proper management of assemblies “Firearms should never be used simply to disperse an assembly; indiscriminate firing into a crowd is always unlawful. Intentional lethal use of force is only lawful where it is strictly unavoidable to protect another life from an imminent threat.” [1]

In this case, there was no clear and imminent threat to life which could have justified the use of lethal weapons against the protesters. Most importantly, the right to life must be respected in all circumstances. The same report further emphasised that “Even if participants in an assembly are not peaceful and as a result forfeit their right to peaceful assembly, they retain all the other rights.” [2]

“We demand that the Philippine Government conducts a prompt and independent investigation into this tragic incident and holds the perpetrators accountable. Those who were killed or injured must be able to access remedies and medical attention. The local Government of Cotabato Province and Kidapawan City must take all necessary steps to resolve the problems caused by the drought. Justice is needed for all the victims of state-perpetrated human rights violations in the Kidapawan crackdown,” concludes Rose Trajano, the Secretary General of PAHRA.