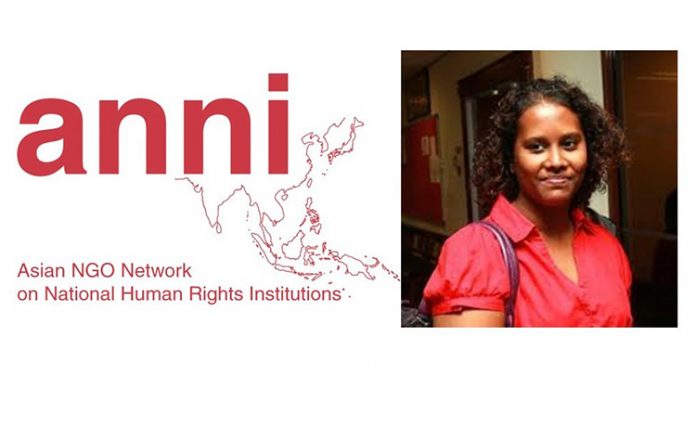 We sincerely hope that SUHAKAM will take immediate actions to address the recent verdict against Lena Hendry by exercising ‘its power to hear a matter without higher referral, opinions, recommendations, proposals and reports on any matters concerning the promotion and protection of human rights’.

On behalf of the Asian NGO Network on National Human Rights Institutions (ANNI), we write you regarding the unjust conviction by Kuala Lumpur Magistrate’s Court of human rights activist, Lena Hendry, on 22 February 2017. She was charged under Section 6(1)(b) of the Film Censorship Act (2002) for screening the documentary, “No Fire Zone: The Killing Fields of Sri Lanka”, about human rights violations during the civil war in Sri Lanka. She was found guilty of screening a movie without prior approval of the Malaysia’s Film Censorship Board.

We view the decision made by the Magistrate’s Court as a restraint on the right to freedom of expression given that it made use of the Film Censorship Act. Also, the conviction was not made in accordance with the principles of a fair and independent trial. After an exhaustive process which took almost 4 years, Lena Hendry was found guilty after Magistrate Mohd Rehan Mohd Aris ruled that the defence had failed to raise reasonable doubt. The final court proceedings contradicted an earlier decision of Kuala Lumpur Magistrate’s Court on 10 March 2016 that acquitted Lena Hendry, and ruled against all the Prosecutor’s charges. However, on 21 September 2016, the Malaysia’s High Court granted the appeal by the Prosecutors, and reversed the acquittal.

The Human Rights Commission of Malaysia, Suruhanjaya Hak Asasi Manusia Malaysia (SUHAKAM) has a responsibility to intervene. The Paris Principles state that national human rights institutions (NHRIs) have a responsibility to submit intervention to Governments, Parliaments, and other competent bodies among others related to ‘drawing the attention of the Government to situations in any part of the country where human rights are violated and making proposals to it for initiatives to put an end to such situations and, where necessary, expressing an opinion on the positions and reactions of the Government’.[1] This responsibility is further emphasised in the Founding Act (1999) of SUHAKAM in Section 2(b), which states that ‘the Commission may exercise its power to advice the Government and/or relevant authorities on complaints against such authorities and recommend to the Government and/or such authorities appropriate measures to be taken’.

ANNI recognises and appreciates previous efforts made by SUHAKAM in promoting the right to freedom of expression by continuously calling on the Malaysian Government to repeal legislations, such as Sedition Act, Security Offences – Special Measurement Act (SOSMA), and other legislations or acts that purposively restrain political expression or criticism addressed to the Malaysian authorities.

We sincerely hope that SUHAKAM will take immediate actions to address the recent verdict against Lena Hendry by exercising ‘its power to hear a matter without higher referral, opinions, recommendations, proposals and reports on any matters concerning the promotion and protection of human rights’. We strongly encourage SUHAKAM to exert its mandate as prescribed by the Paris Principles and its own Founding Act.

[1] Article 3 (a), Principles relating to the Status of National Institutions (The Paris Principles), available on  http://www.ohchr.org/EN/ProfessionalInterest/Pages/StatusOfNationalInstitutions.aspx, last accessed on 13 March 2017.